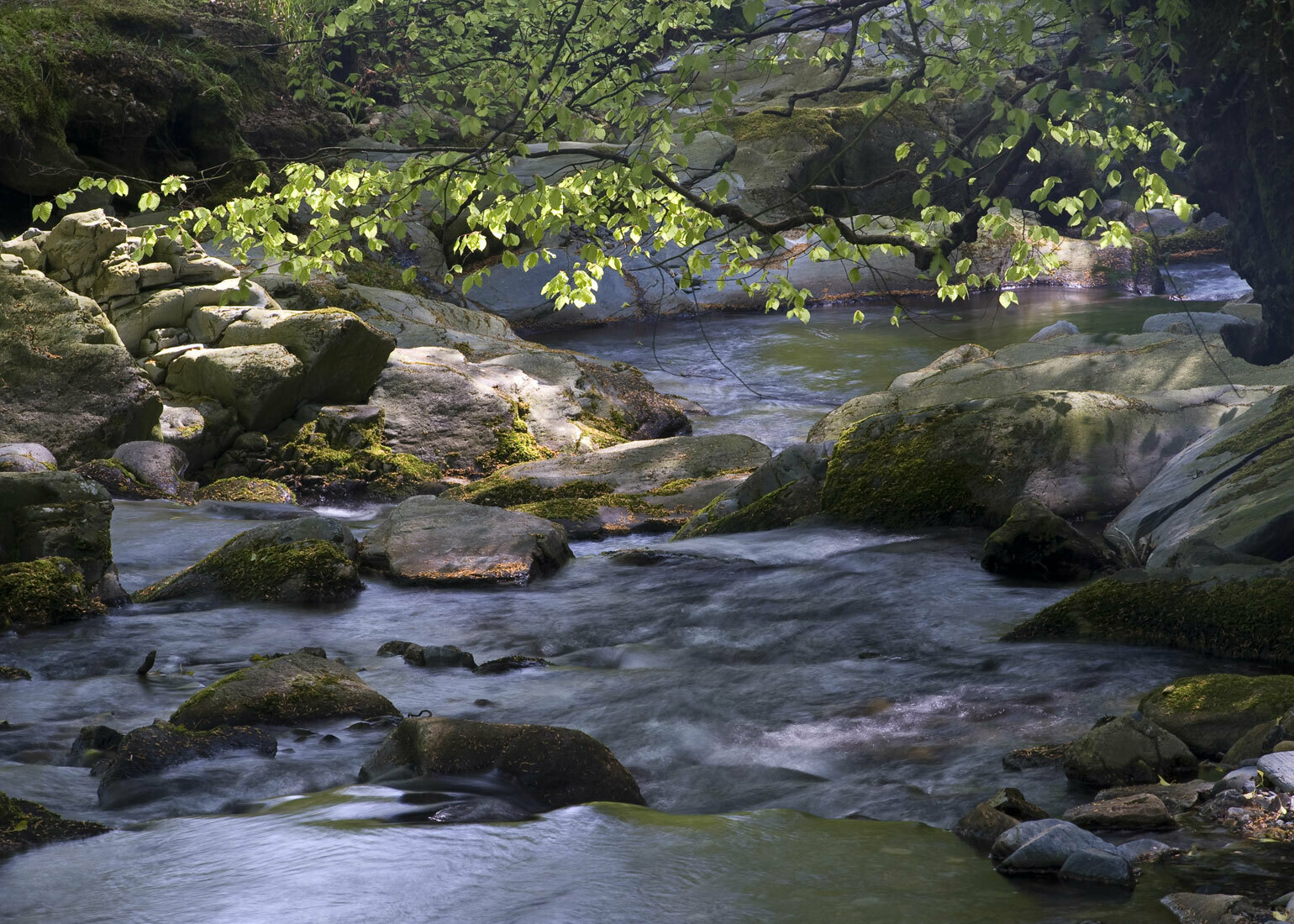 Ballaglass Glen in the parish of Maughold, is actually part of Cornaa Glen.  Ballaglass totals about 17 acres.  It has a wide reputation for its charm and beauty with a lovely rock-bedded stream, heavily foliaged land and an abundance of bluebells in springtime. Ballaglass Glen in the Isle of Man is popular with artists and photographers and is easily accessible.

This glen is very popular with artists and photographers.  It has easy access from the electric tram, which stops at its top entrance.  For those visiting by car, turn down to Maughold village at the Hibernia, on the main Laxey to Ramsey road, then turn right down the road marked Cornaa.  A large car park is provided at the bottom entrance to the glen.

In 1861 Ballaglass was the property of W Haslam Esq JP. At the turn of the 19th century it was in the ownership of Arthur Edward and Catherine Sheeran who in 1913 sold it to the Manx Electric Railway Company, who then sold it, along with Tholt-y-Will, to the Forestry Board in 1952.  The name Ballaglass could be translated to 'Farm of the Stream'.

The remains of a flax mill and the stone buildings, which once belonged to a lead mine, run by the Great Mona Mining Company, can still be seen in the glen.  The building near the top of the glen, by the river was the mine's office and the structure against it, the wheel case.  The mine was very short lived due to the poor grade and low quantity of lead ore discovered.  It was in operation for only a few years.  The mine's office later became a cafe for a short time.  It was described as being two storeys, stone built with a slate roof.  The rooms were 7 ft 6 inches high, with 24-inch thick walls.

The little cottage at the bottom of the glen is also two storeys with two rooms on the ground floor and two attic rooms with skylights.  The familiar "Thie Veg" (lavatory) stands at the bottom of the pretty little garden.  In 1952 the cottage was let for a rent of 4 shillings per week to a Mr J A Clague and the address was 1 Ballaglass Cottage.

This glen was a favourite haunt of the Manx Poet T E Brown and Cornaa River has at times been known as "The Musical Stream" when flowing down through Ballaglass.  It is also a favourite spot for attracting artists.

In 1840, when the Island was trying to establish its tree population, a reward was offered for information about timber being cut down in the glen.  The incident had been reported in the local paper and I wonder if the perpetrator was ever discovered.

During the 1980s a storm erupted over the erection of gates at the bottom entrance to the glen.  The then owner of Cornaa Mill House, Dr D G Teall, was quite within his rights to put up the gates on what was actually his land.  Sir Charles Kerruish, who led the local residents in their complaint, called it "upmarket vandalism".  Dr Teall however had not locked the gates and access was still available so nothing could be done.  The Forestry Board therefore erected new signs informing the public of free access through this route.

In 1989 a small parcel of land on the northern side of the glen was purchased from John Johnson Wilson of Shenvalla, Cornaa and formerly of Chester, for £3,000, thereby allowing access into the glen from what had become the car park.