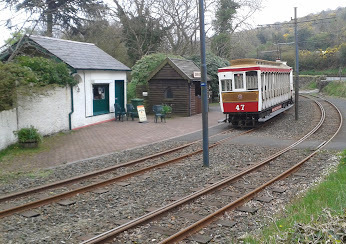 Dhoon Glen in the parish of Maughold, is the deepest glen on the Island and is in a ravine 3 kilometres north of Laxey.  It is a glen for the more adventurous, being more of a climb back up than a stroll.  It is made up of 44 acres and has one of the highest and most spectacular waterfalls in all of the glens.  Known as "Big Girl", it totals over 40 metres (130 ft) in two drops.  Access is by car, (ample parking across the road from the entrance), bus or electric tram.

A delightful little cafe stands at its entrance with seating to enjoy homemade cakes whilst watching the trams roll past.

"Leap from the crags, brave boy
The musing hills have kept thee long
But they have made thee strong
And fed thee with the fullness of their joy
And given direction that thou might'st return
To me who yearn
At foot of this great steep
Leap! Leap!
So the stream lept
Into his mother's arms
Who wept
A space

Then calmed her sweet alarms
And smiled to see him as he slept
Wrapt in that dear embrace
And with the brooding of her tepid breast
Cherished his mountain chillness
O, then what a rest!
O, everywhere what stillness

The area around the Dhoon, including the glen, was originally owned by a doctor from Douglas by the name of H R Oswald until he sold the area to William Quilleash.  Then in 1872 William Quilleash sold a large amount of the land to a man by the name of William Bailie but leased the upper part of the glen, including the waterfall and land on the Ballaragh side, to James Quilleash of Houlton, Oregon, USA.

In 1874 James Quilleash began to develop Dhoon Glen for tourists to visit.  By 1877 he was advertising refreshment rooms and stabling, and four years later he held a licence for the Dhoon Waterfall Inn.

William Bailie also wanted to develop the glen and a period of rivalry ensued.  It wasn't clear where the boundary in the glen lay and Bailie accused Quilleash of trespassing when he was making roadways and paths.  This went to court but the jury dismissed the accusation.

Bailie, however, seems to have come out on top, as he later spent a large amount of money erecting a hotel on the site that is now the car park.  The hotel had a frontage of 116 ft, the bar was 52 ft long and there was a dining room measuring 54 ft by 20 ft.

The hotel was destroyed by fire in 1932 on one Sunday afternoon whilst the licensee was out.

Ramsey Fire Brigade arrived as quickly as it was possible in those days, but its all-wood construction, coupled with the difficulty of getting water up from the stream, hampered their efforts to save it.

Bailie also built a restaurant down on the shore which had a skilful arrangement of mirrors around the dining room which was to have the effect of reproducing all the little nooks and corners of the rocky coast so that diners could face the landscapes up the glen but at the same time watch the waves tumbling over the pebbles on the shore behind them.

By 1888, due to ill health, William Bailie decided to sell the glen along with 70 acres of arable land and two granite quarries, one of these being in the glen itself.  Bailie had originally wanted to work these quarries himself and had planned to put a tramway, with an easy gradient, right down to the beach and then to export the granite from Dhoon Beach to destinations all over the world. The auctioneer for the sale of the glen said that Bailie had laid down six miles of paths and roads into every nook and corner of the glen and had planted 75,000 trees.  He also pointed out that even though that season had been a considerably wet one, weather wise, the glen had seen the arrival of 42,000 visitors by road and 8,000 by sea.  The farm, which was also in the sale, had produced all the meat, vegetables and dairy produce that had been required by the hotel and restaurant.

An offer of £10,000 was made but this was considerably below the reserve price so no sale took place.

By the following year Bailie's son was running the hotel and inn.

In spite of the large number of visitors the glen was not a success financially and in June 1891 the mortgagees insisted it be offered for sale again.  Eventually the mortgagees themselves had to buy in the property for £8,400.

A well known Ramsey business man, Mr J J Corlett who ran the "Rest and Be Thankful" at Slieu Lewaigue, took on the lease for the glen and hotel and everything continued as usual with over a hundred and fifty vehicles passing through on Sundays alone.  There was excellent stabling accommodation behind the hotel for the horses. Then, with the arrival of the Isle of Man Electric Tramway in 1897 the glen was taken over by the company who charged 4d admission of which the owners received 1 3/4d.

In 1938 the glen is recorded as being sold for £1,650 to John Edward Howes formerly of The Dhoon Hotel by James Quilleash who must have retained an interest in it.

The Forestry, Mines and Lands Board then purchased, in 1955, the glen, land, pleasure ground and premises along with the adjoining Glen Callin, consisting in total of 44 acres or thereabouts, from Mr Howe for £2,000.  The Manx Government allocated a further £2,700 to carry out improvements and 20 additional workers were employed for a period of 16 weeks to carry out the work.

This work consisted of: treatment to the trees; cutting and burning of numerous suppressed trees throughout the entire area; clearing dead branches from the river; cutting and removing dead ivy from trees; planting 11 acres of mixed hardwoods and conifers; fencing 1 3/4 miles of boundaries; widening pathways and trimming and opening new water outlets; making provision for garden seats throughout the glen; replacing faulty handrails and erecting 120 yards of new rails; repairing wooden bridges and their decking; building in 55 new steps in the steep parts of the glen; clearing the undergrowth at the entrance and laying out 1/4 acre as a wild garden; erecting 40 yards of rustic fencing at the entrance to the glen and the preparing and planting of ornamental shrubs.  John Howes was still the owner of the car park in 1958.

In 1974 The Forestry, Mines and Land Board opened up an area of free ramblage on the south side of the glen.

The large structure about a third of the way into the glen is the remains of the wheelcase which was used in the mid nineteenth century.  Mining in the glens was a short lived venture as not enough lead or tin was ever found to make it profitable.

The main waterfall, called "Inneen Vooar" means "Big Girl".  There is a story of a young girl having been drowned in the pool below it, and it is said that her ghost haunts the glen to this day.  The glen still has evidence of mining, with the remains of the old wheel case just above the falls.  As one of the steepest glens on the Island it is interesting to note that there are over 190 steps back up to the road.