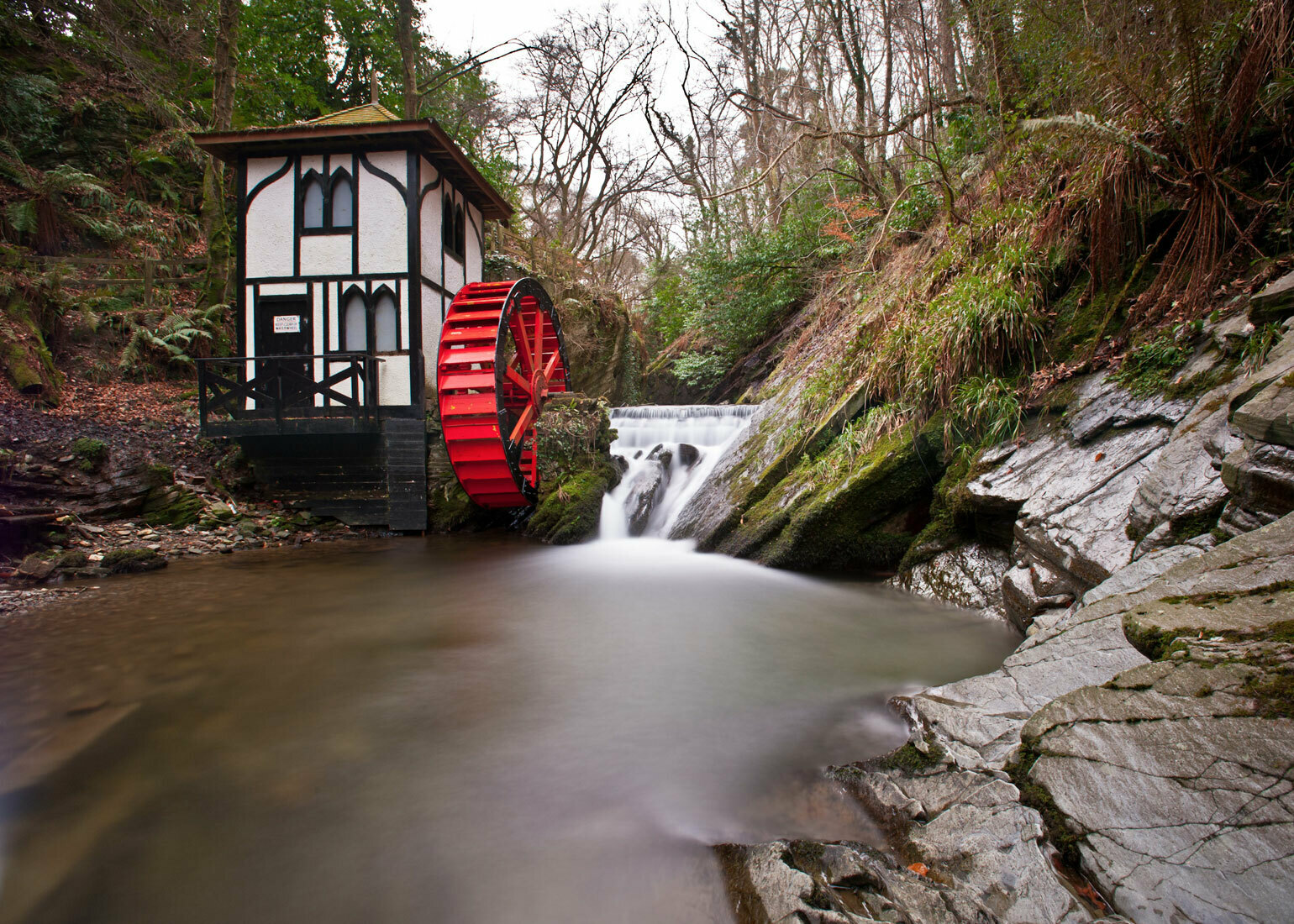 Groudle Glen is a small glen on the outskirts of Onchan, easily accessed by car or from the Manx Electric Railway

Groudle Glen is situated on the boundary between the parishes of Onchan and Lonan, 2 1/2 miles north of Douglas.  Access is by electric tram, bus, on foot from Onchan or by car.  A large car park is provided on the beach entrance but parking for the other entrances is on the road.

This glen has four entrances, one at the Whitebridge on the main Onchan to Laxey road, one on the coast road at the tram stop next to the restaurant, one around the corner which is the entrance to Lhen Coan and the last one is from the beach.

The glen is approximately 0.4 km (400yds) in width and extends for about a mile from the sea.

In the year 1890, an enterprising businessman by the name of Mr Richard Maitby Broadbent who owned the Bibaloe Beg farm in Onchan, purchased the lease for the whole of the Groudle Glen area from the Howstrake Estate.  At that time the glen was in its natural state with grass, ferns and very few trees, indeed when the glen first opened to the public it was known as "The Fern Glen of the Isle of Man".

This was at the height of the tourist industry's growth and Broadbent could see the attraction in having a hotel and a glen with romantic walks and attractions.  He also knew that the newly constructed electric railway would be passing close by.  Broadbent, in discussions with the railway developer Mr Saunderson, agreed that land could be taken over by the Douglas Bay Estate Company to allow the railway line to pass opposite the site of the planned hotel.  He also agreed to pay a percentage of the gate takings into the glen to the railway company.  Construction of the hotel designed by Baillie Scott at a cost of £1,500 began immediately and the doors were opened to the public on July 7th 1893.  Next door to the hotel was a little cafe, which had originally stood on the end of the Iron Pier in Douglas.  It was moved to Groudle when the pier, at the bottom of Broadway was dismantled in 1893.

The development of the glen continued with trees being planted and the trademark rustic bridges built across the river.  A pathway was made from the entrance beside the hotel to a rocky inlet approximately half a mile around the headlands.

The inlet was a perfect natural bowl, sheltered from the winds and it was decided to use it to its full potential by creating a sea-lion pool.  To achieve this, the inlet was dammed and closed off, so creating a lovely pool area in which to house not only the sea-lions but even a polar bear.  Eleven sea-lions were purchased from California but five perished on the journey to the Island. Only two of the remaining six survived until after the First World War.  Their names were Tommy and Jenny.

The sea lions were looked after by Gaby Dobson, who lived with his family in a stone built house on the beach.  Eighteen stones of fish were required to feed the sea-lions each week.  Another amusement, which would horrify us today, was the sight of two brown bear cubs chained to the rocks.  Postcards were sold with pictures of these two Teddy bears on them.

The glen had at its entrance, a stall selling a variety of holiday goods followed by the ticket office with turn style.  On turning right, the pathway led to a fortune teller (Mrs Hornbury), a darts stall, run by Mr William Hall, and then onwards to the little wheel house and dance floor where a small band played during the day and most evenings.  Also in the glen was an aviary, lily ponds and a bowling green.  Near the beach were swings and roundabouts for the children.

Broadbent then hit on the idea of introducing yet another attraction, a narrow (two-foot) gauge railway to run from the inner glen to the sea-lion pool.  The little railway was completed in 1896, using entirely local labour.  Shortly after, Mr Broadbent took delivery of a small locomotive, aptly named the "Sea-lion", along with three small coaches, which had arrived from England.  It was to be advertised in the local press and guide books as the world's smallest railway.  On July 20th a special trip on the "Sea-lion" was arranged for local dignitaries and pressmen followed by lunch at the Groudle Hotel.

Business boomed and at the height of the summer seasons the little train was making up to 40 trips a day along the three-quarter mile line.  Passengers could also get refreshments at the Sea-Lion cafe, which was on the hill at the pool end of the track.

This venture was not without its problems and in its first season there was a terrible accident.  On the morning of August 28th the "Sea-lion" was approaching the pool terminus on her second trip.  The coaches behind her were full of excited tourists eagerly awaiting their first sightings of the sea-lion pool.  Tragedy was to occur when she failed to stop as she reached the newly erected "stop block" at the end of the line.  The locomotive and all three carriages were derailed and a total of 16 people were injured.  The injured passengers were transported back to the hotel where they were met by doctors who had been sent for from Douglas.  The following day the Isle of Man Times reported that the engine driver, Robert Faragher, had been prone to epileptic fits, although it was never confirmed that this was the reason for the accident.

The overall success of the railway led to a second engine being purchased and naturally this was named the "Polar Bear".  However after the first World War the price of coal rose dramatically and the two steam engines were replaced with two new battery powered trams.

All went well for the next six years, until the two trams literally wore themselves out with constant use.

Coal prices had now stabilised so the two old faithful steam engines were given a complete overhaul and brought back in to service.

The polar bears were retired during the Great War.  Their keeper at the time, Mr Fred Kelly who lived in the cottage, the ruins of which can still be seen at the lower entrance to the glen, had been under instructions to shoot them, but was unable to face the task, however we do not know the final outcome.

The second World War saw the closure of the pool, and the sea-lions released.

Unfortunately when the line reopened in 1946 the Groudle company suffered badly at the hands of what had become a new post-war phenomenon, vandals.

With a landslide on the headland making it impossible for the trains to reach the pool and the added fact that the sea lions were not replaced, it was decided to close the line.

The Groudle line was taken over in 1961 by Groudle Ltd with directors Mr C M Watterson, Mr W L Callister and Mr J R Keig.  The company was plagued with problems and the trains only ran for two years before closing.  As they lay dormant, the locomotives, coaches, sheds and tramlines were seriously vandalised over the years, to such an extent that one of the coaches ended up in the sea.

The glen has a water wheel and wheelhouse, which were first operated in about 1895.  The wheel provided power for the glen's fairy lights, and water was pumped up the glen to the hotel at the top.

Later in its life, it was a feature in a well known 1986 BBC TV series called 'Lovejoy".

The top section of the glen, by the Whitebridge Road, also contained a slaughter house at one time.  Mr Alec Nivison who ran a butcher's shop at the top of Royal Avenue, applied in 1906 to use an outbuilding at the rear of his premises as a slaughter house.

This application was refused and so he built a galvanised iron slaughter house amongst the trees on the right-hand side of Whitebridge Road in a corner of Groudle Glen.

The viaduct was constructed in 1894 by local contractor Mark Carine, essentially to carry the road and tramline to Laxey.

Onchan Village Commissioners took over the glen in 1967 when they paid Groudle Ltd £3,250.  This excluded the hotel.  They later sold the lower half of the glen to Harbour and Glen Investments Ltd who built the Groudle holiday village and also set up Tynwald Mills.

The remainder of the glen was taken over in 1975 by the Isle of Man Department of Agriculture, Fisheries and Forestry (now the Department of Environment, Food and Agriculture) on a 99-year lease with a yearly rent of £5.

Later on, in 1985, the Manx Conservation Society started restoring the lily ponds to their former glory.

The Onchan branch of the Rotary Club, in conjunction with the Department of Transport and DAFF, constructed, in the summer of 2001, a new path underneath the Whitebridge road to connect the two glens of Groudle and Molly Quirk's.

The bulk of the work was done by the members themselves who gave up their spare time to construct this much needed new pathway.  This now enables families, dog walkers, joggers and anyone just enjoying the glens, to cross from one to the other without risking life and limb trying to negotiate the very busy Whitebridge Road.

A branch of Groudle Glen is known as Lhen Coan (lonely or narrow valley) which was described as the Island's only canyon.  This is the entrance to Groudle Glen from the road past the hotel as you head out towards the Liverpool Arms.