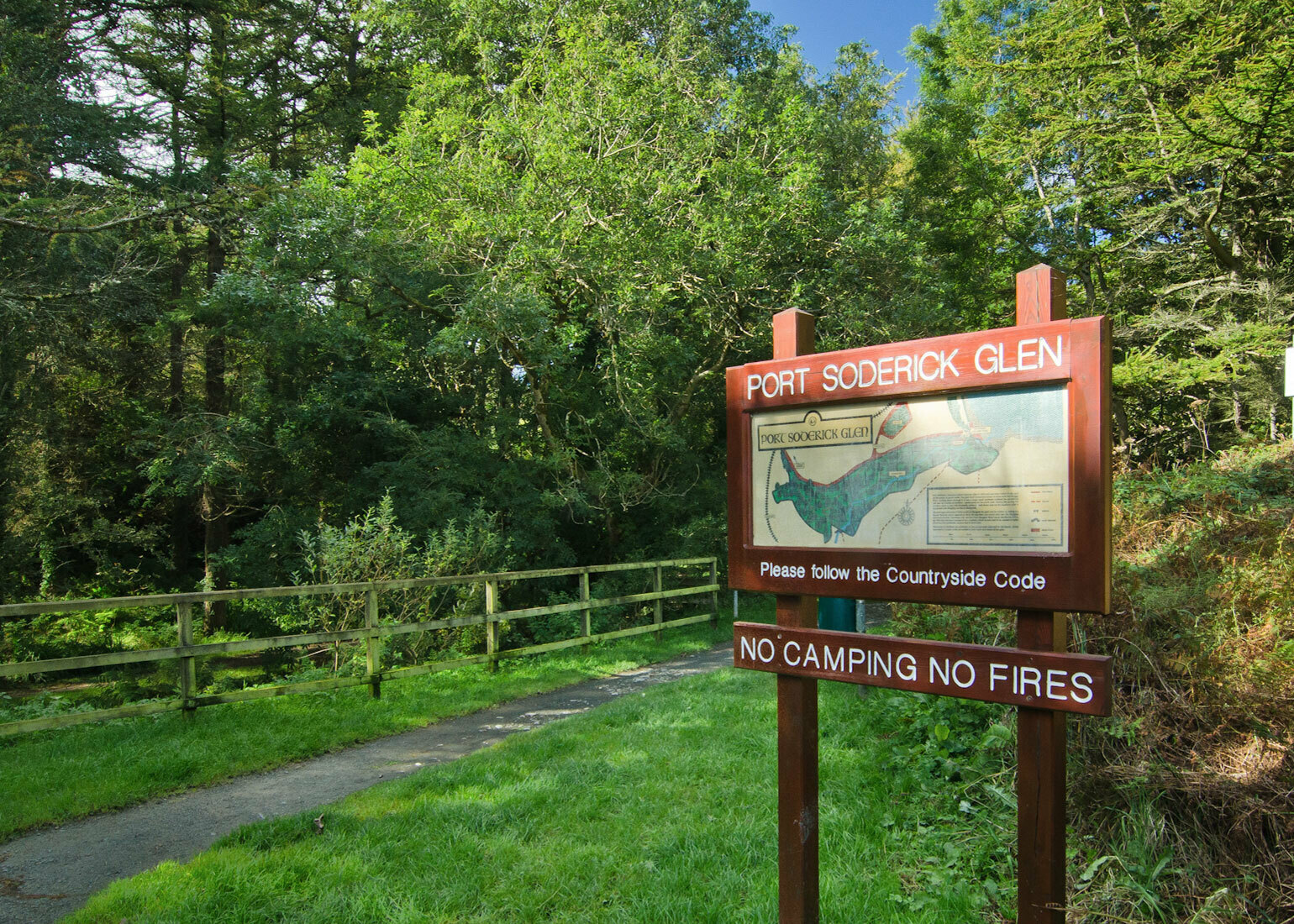 Visit Port Soderick in the Isle of Man via Steam Railway

Situated 4 miles south of Douglas on the coast road to Santon, access is easiest by car (the glen has ample parking), but it can also be reached by bus and steam train.  It has a large central grass paddock area suitable for picnics and is adjacent to Port Soderick beach and caves.

Once known as Sunny or South Creek, this glen may also be called Crogga, having the river Crogga running through it, but it is more commonly known as Port Soderick after the little bay into which it emerges.  It consists of about 15 acres.

The Forrester brothers developed Port Soderick as a tourist attraction and a plaque was set into the sea wall recording this. They advertised Port Soderick as the only free glen on the Island. Money was made through the many attractions on the beach front which included refreshment rooms, swing boats, side stalls, camera obscura, boating, an arcade, and stalls from which one could buy candles to explore the caves.  One of the more curious attractions inside the arcade was the padded cell from the hospital on the ship The Olympic, sister ship to the Titanic.  The two Forrester brothers also ran a cafe on Victoria Pier in Douglas and operated a little steam launch between Douglas and Port Soderick.  Two other ways of reaching Port Soderick were by either Steam Railway or the Douglas & Southern Electric Tramway, which ran along Marine Drive.  Upon reaching the glen, visitors could take the scenic funicular railway, which ran from the hotel on the beach up to the top road. This railway originated at the Falcon Cliff in Douglas.

The walkway which goes out around the headland was not opened up until sometime after 1906, as postcards from that year clearly show no path or hand rails in that area.  Later years saw an amusement arcade opening, with slot machines and prize bingo.

The Forestry, Mines & Lands Board paid the nominal price of 25p to acquire this glen from Douglas Corporation in 1975.  The purchase excluded the cafe/ballroom, play area and the car park at the entrance to the glen.  However ten years later, in 1985, a further figure of 25p was paid for the car park.

Going into the actual glen from the beach end, you come across a paddock area with banks, which are full of beautiful bluebells in the spring time.  This area is actually lower than the river bank and became known locally as "The Lovers' Trap" due to the number of cars which had driven down and tried to drive into the glen for some privacy.  The boggy ground was the scene for numerous trapped cars, which the local farmer would capitalise on by charging £25 to pull them out with his tractor.  The Forestry Board eventually put a post at the entrance to stop any further embarrassment!