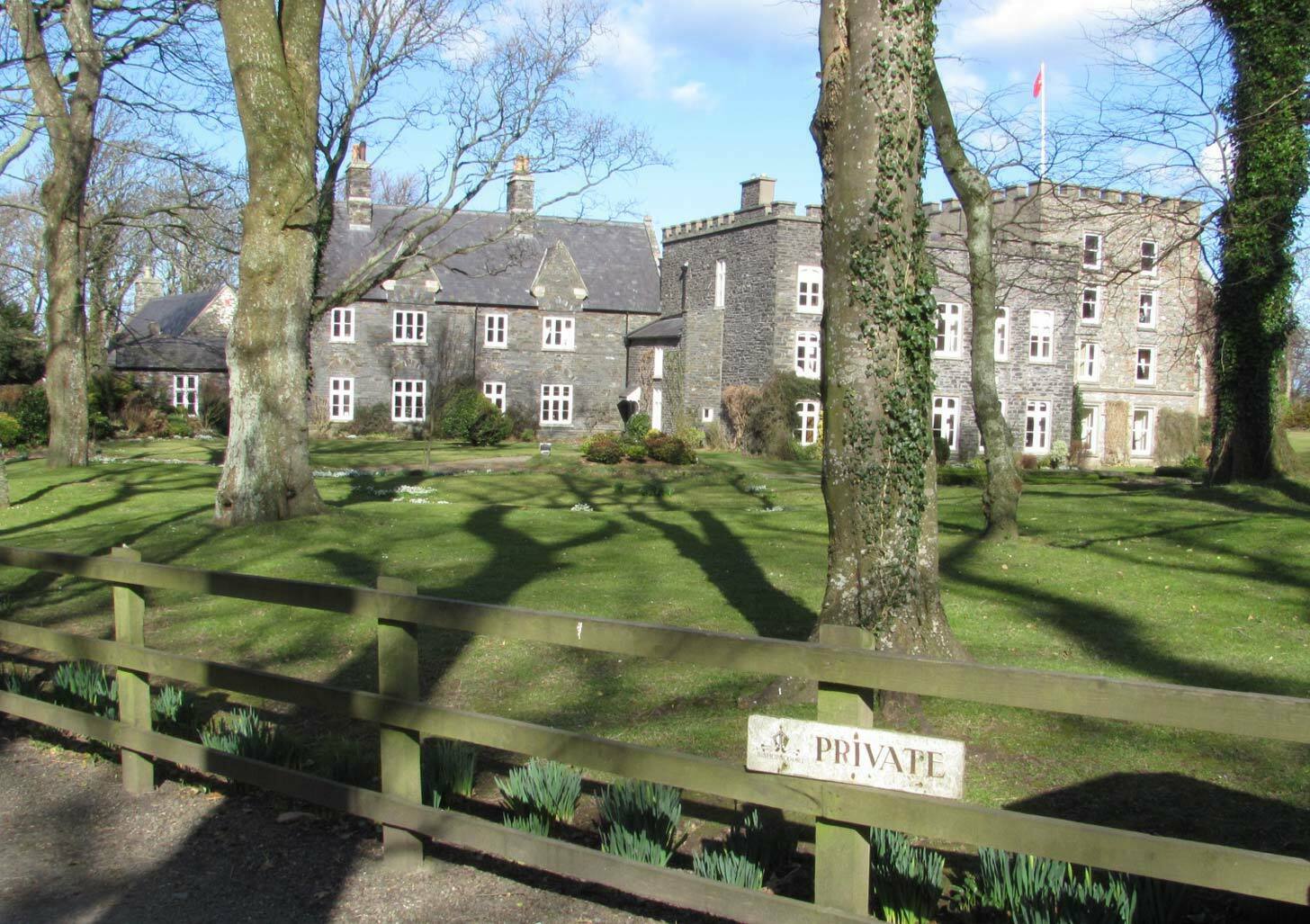 Possibly founded by Bishop Simon (d. 1247) though the earliest surviving portion is the tower dating from end of 14th Century. Many Bishops added to this core - by the end of the 17th Century a late medieval chapel stood to the east of the tower and a hall to the west, the chapel lay half in Ballaugh and half in Michael, for in it the 'respective Parsons and Vicars severally officiate divine service, the one at the one side or end of the said chapel, and the other at the other'.

When Bishop Wilson arrived in 1698 he found the 'house in ruins nothing but a sentient tower and chapel remaining entire'. He restored it and made the attached farm very productive.

Bishop Crigan, a century later, also had to restore much of the building, especially the tower which had had the crenellations removed and the roof line altered.

Bishop Murray, arriving in 1814 wished to pull it down and rebuild, but was prevented in these plans - he became reconciled to it, coming to the conclusion that Crigan's dilapidation 'rendered it more wretched in appearance than it really is '. However he employed Thomas Brine to redesign the kitchen wing, restore the battlements to the tower and to add a new Georgian gothic chapel on the site of the old. John Welch's comments were somewhat mixed " the arrangement generally is clumsy and inconvenient in the extreme. He [Bishop Murray] also added the pretty little chapel to the mansion, and diffused his taste likewise over the gardens and pleasure grounds, which were much beautified by him, and the domain generally greatly improved.

However his attempt to raise tithes to pay for his gracious living led to his hurried departure in 1828.

The current chapel dates from Bishop Powys time in 1858 when he had the Georgian chapel torn down and replaced by today's Victorian Chapel.

A major fire in 1893 destroyed the central part of the house; it is the rebuilding that we see today.

As a temporary provision in light of the problems about restoring Old St. German's Cathedral this chapel was designated a pro-Cathedral and contained stalls for the Cathedral Chapter established in 1895.

Since 1979, Bishopscourt has been privately owned, and, in recent years, was the home of Lancashire industrialist William Lomas, until his premature death in 2005. Mr Lomas completely renovated the house, which has five splendid reception rooms, eight bed-rooms, extensive staff quarters, a massive coach house, outbuildings and 10.5 acres of gardens and grounds.

Bishopscourt was sold into private hands in 1979, so ending more than seven centuries of association with the Diocese of Sodor and Man.