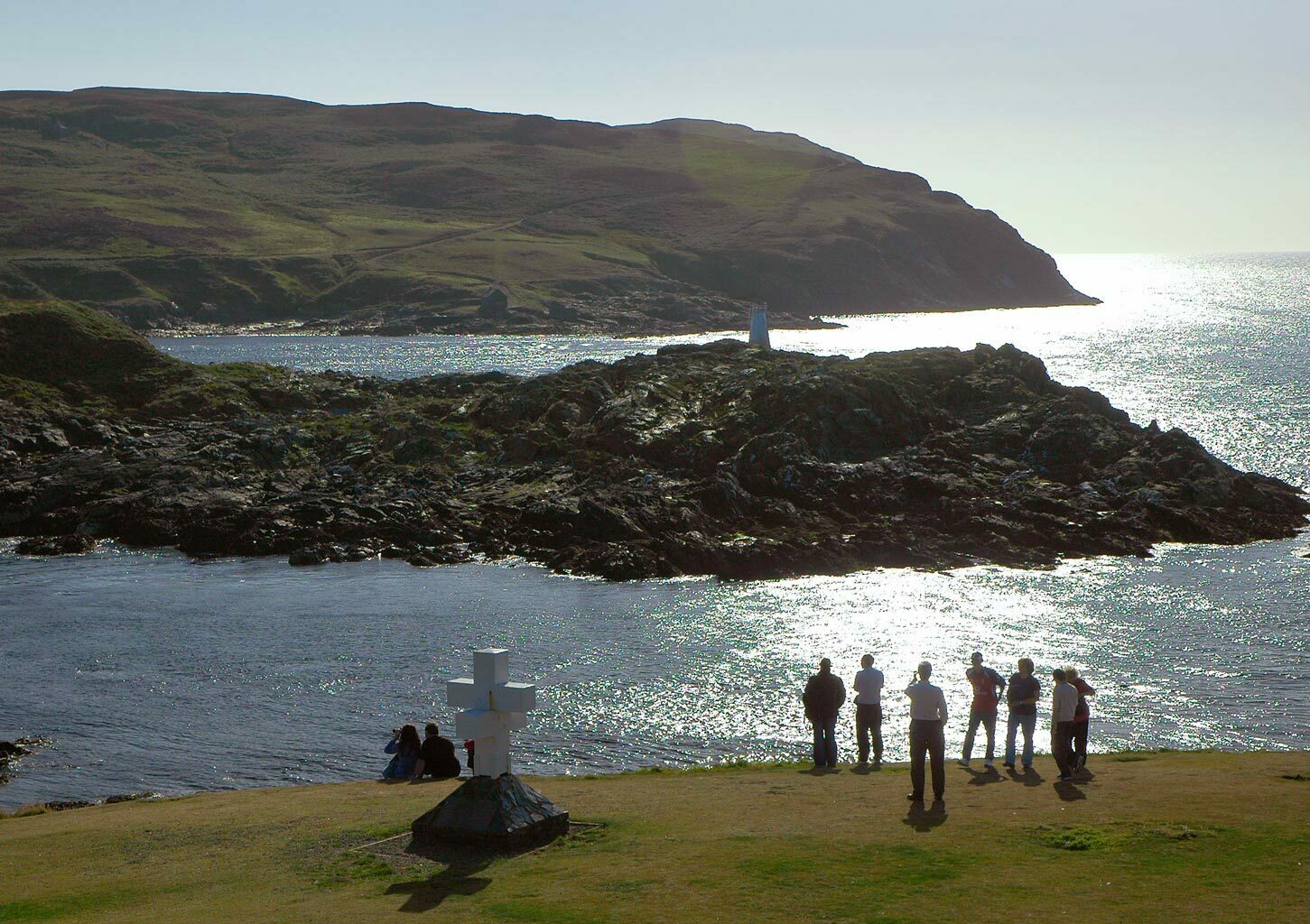 No guide to the Island's coast would be complete without a mention of the Calf of Man, the tiny islet at the foot of the Island's southernmost tip.  Separated from the 'mainland' by the Calf Sound, a stretch of water notorious for its ferocious tidal race, it is a bird sanctuary inhabited only by two wardens, who are resident from March to November.

It's an essential destination for birdwatchers, being home to a number of seabird colonies and on the migratory routes of thousands of species.  It is possible to book a short stay on the Island's farmhouse through Manx National Heritage.  Day trips also run throughout the summer from Port St Mary and Port Erin.  The Calf offers a timeless sense of peace and a chance to experience a beautiful corner of the natural world without leaving a footprint.

In size the Calf of Man measures about one and a half miles long by one mile wide and is just under one square mile in area.  It rises to a height of 421 feet.  The word Calf derives from the Scandinavian Kalfr and means a small island lying near a larger one.

The landscape hereabouts is dramatic.  A visitor to the Isle of Man in the 1600s wrote that the Isle of Man glories in its Calf. This is equally true today.  The Calf lies serenely and mysteriously beyond the often turbulent waters of its sound, a very fast tidal race.  It appears to be so near, less than half a mile away, and if the weather permits, it is well worth making the effort to take the short sea crossing to visit the Calf.

Prior to 1939 the Calf had various private owners but in that year it was presented by the then owner to the National Trust of the United Kingdom.  In due course the Manx National Trust was formed and this body acquired the Calf and administers the little Island.  It is now a bird sanctuary and open to the public except during the nesting season.  Its only occupants are the nature wardens during the Summer months.

In Chapters 154-155 of the 13th century Njals Saga (Icelandic), describe how before the Battle of Clontarf in 1104, two viking ships lay in a sound off the Isle of Man.  Their crews were terrified for three nights by noises made by ravens.  Naturalists know these must have been Manx Shearwaters, which bred in thousands on the Calf for centuries, if not millennia, until they were over-exploited in modern times.  They are extremely noisy at night, and their close relative Audubon's Shearwater gained a similar notoriety in the West Indies around 1600 when Spanish sailors thought the Devil was calling to them.

An early record of 1292 concerning the Calf of Man is that of Edward I of England who, as the Lord of Mann at that time, gave permission to the Earl of Buchan to mine lead to roof eight turrets of his castle at Crigelton and Gallowaye in Scotland.

Another record of this little island appeared in 1511 in the Manorial Roll of the Lord of Mann where it was listed, in Norman French, as Le Calf.  At that time the Calf was in the possession of the Stevenson family of Balladoole.  In 1648 this family was obliged to give up the Calf to the Lord of Mann who feared that it might be invaded by the Parliamentarian forces in the English civil war.  As compensation for the loss of the Calf the Stevenson family was to receive annually 500 puffins, (Fratercula arctica), or Sea Parrots as they were commonly called.  These seabirds nested in burrows in the ground and were considered a table delicacy.  Later, the Lord's small fleet of ships did in fact successfully beat off an attack on the Calf by three English Parliamentarian naval vessels.

In 1776 John Quayle held the tenancy of the Calf which he stocked with deer and other game for hunting purposes.

At about this period, and during his tenancy, his workmen were taking stone from the ruins of an ancient keeill, or early Celtic chapel, to use as building material.  A remarkable discovery was made.  This was a portion of a decorated panel, possibly from an altar front, carved on a slab of slate.  It dates from about the first half of the nineth century and has been described as an outstanding example of Celtic art.  For fineness and delicacy of workmanship in stone at that early period it is unequalled.  It is typically Byzantine in style and serves as an example of the artistic influence which the eastern Mediterranean Church had on the Celtic Church at that time.  Similar work on bronze plates and in other metal is to be found in Ireland.

The carving depicts the crucifixion of Christ whose clothed figure is flanked on the left hand side by a Roman soldier with a spear.  On the missing right hand portion of the slab would have been another soldier with a sponge of vinegar as related in the Gospels.  The surviving portion of the slab measures about 26 inches by ten inches.  (660 X 250 mm).  It is displayed in the Manx Museum at Douglas.

Calf of Man postage stamps, technically classed as a private local issue, appeared from 1962 until 1973 when the Isle of Man became postally independent and the Calf stamp issues were suppressed.  Although these issues, which totalled 376 stamps, were ostensibly to cover postage from the Calf to Port St Mary on the Isle of Man, they were basically philatelic items and still attract many collectors.

The waters around the Calf are a paradise for SCUBA diving from boats by those who are suitably experienced.  For those who do not dive, a boat excursion will reward them with a wealth of birdlife and probably a chance to watch the seals as they sunbathe on the rocks and to catch a glimpse of basking sharks which enjoy legal protection in Manx waters.