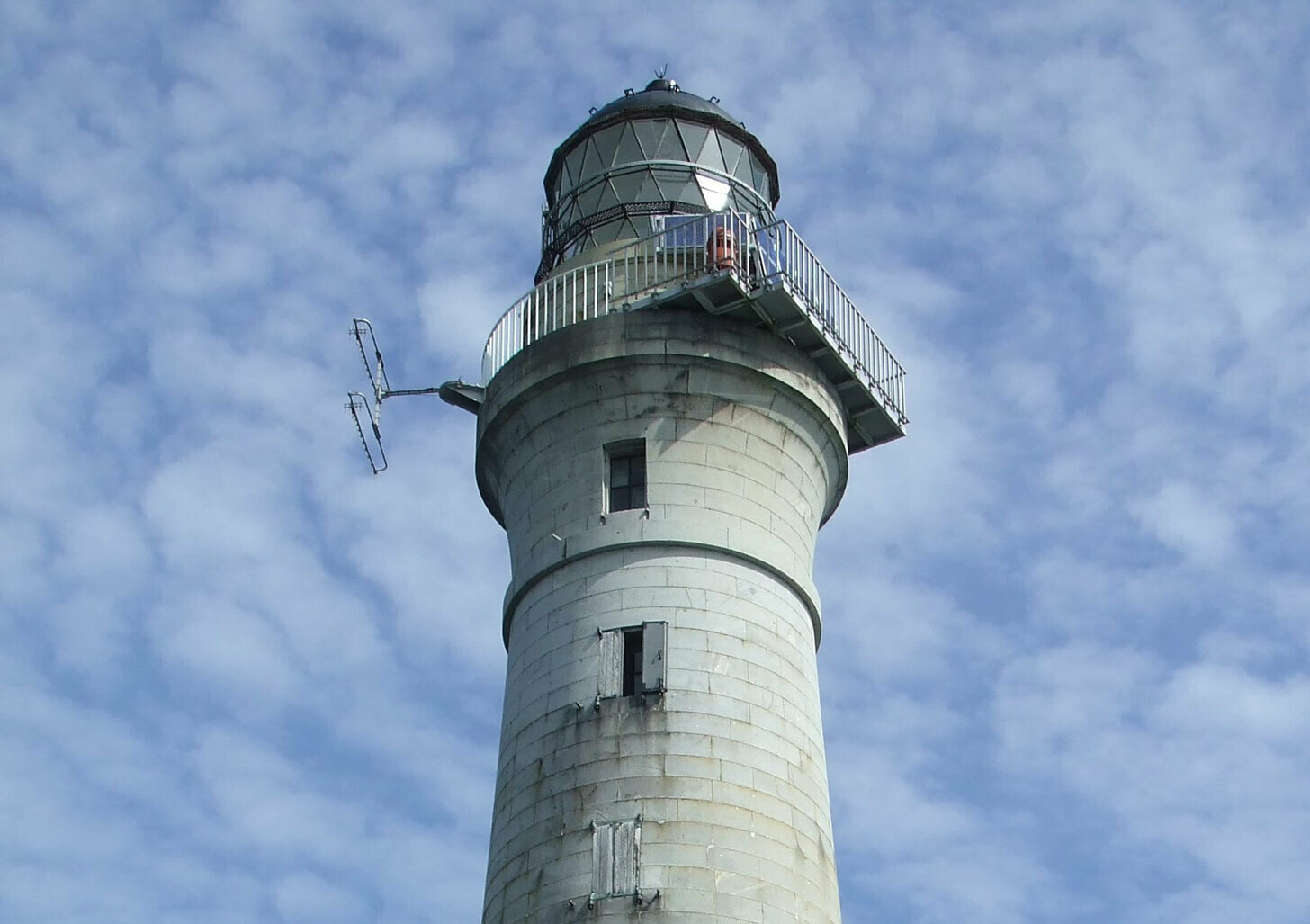 Situated on a rock situated one and a half miles from the Calf of Man.

On 13 November 1866 the Board of Trade forwarded a copy of one of the resolutions come to unanimously by the Committee appointed by the Mercantile Service Association of Liverpool to consider the subject of lighting the St George's channel. It was to the effect that "The night light on Calf of Man now so often enveloped in fog and so rendered useless, to be removed to the Chicken Rock which is one mile and a half out and is a rock of considerable size and great danger".

This was remitted to David Thomas Stevenson, Engineer to the Commissioners, who agreed in his report on the subject on 22 October 1867. The matter was referred to Trinity House, who wrote on 21 November 1867 to the Board of Trade recommending the proposal. Trinity House emphasised that "the Calf of Man Lights were not to be depended upon from the well known prevalence of fog on the Calf even when other high lands are clear", and that, as a result at the distance of 8 miles they were insufficient to warn vessels of their proximity to Langness. A light on the Chicken Rock would be of great assistant to Mariners navigating East, West and North of the Isle of Man.

On 6 April 1868 sanction to proceed was given by the Board of Trade. However, it was not until 6 June 1873 that the last stone of the tower was laid.

On 29 April 1873 the Board of Trade conveyed to Trinity House their statutory sanction to the proposal that "the character of the light now in course of erection as Chicken Rock should be revolving of the natural colour and attain its greatest brilliancy every half a minute and further to the requisite arrangements for throwing from the same lighthouse a red sector of the light to mark the path round Langness Point. These arrangements can be carried out either by fixing an auxiliary condensing apparatus, consisting of small holophotes at the rear of the main apparatus, in the lantern of the Lighthouse or by some other method, which the optical skill of Messrs Stevenson may advise".

There was considerable correspondence and disagreement between D T Stevenson and Trinity House regarding the proposal to show a red arc from Chicken Rock to make a track round Langness Point and to fit ten holophotes in the lightroom. Mr Stevenson argued that the red arc would be useless in hazy weather, that there would be out of superficial reflections, poor ventilation and the revolving plane would be out of centre in the Lightroom. Trinity House refuted these objections and stated difficulties could be overcome by using a larger lantern with main apparatus in centre and by using Calzo Oil instead of paraffin. Under protest the red arc and auxiliary apparatus were fitted. However, experiments were carried out which confirmed Mr Stevenson's opinions and when the Chicken Rock Light was exhibited for the first time on 1 January 1875, it was without the red auxiliary and with the use of paraffin instead of Calzo.

The Commissioners, having inspected Chicken Rock Light and the Shore Station at the Calf of Man in 1875, recommended that the shore station be removed to Port St Mary, where the boatman can crew lived.

Over and above nothing could grow in the gardens "for legions of rats".

A fog signal was added about 1890 which sounded every 5 minutes.

On the night of 23 December 1960 the lighthouse was seriously damaged internally by fire and during 1961 detailed consideration was given to the problem of the future status of the station and the provision of navigational aids generally in the area.

The proposal for a major light and fog signal on the Calf Man was included provisionally in the Engineer's new Works in September 1961 and the Commissioners subsequently agreed that the matter be referred to the Shipowners through this Advisory Committee for consideration. The Secretary of the Committee later reported a substantial majority in favour of the proposal subject to a number of conditions including the addition of a form of automatic fog on the Chicken Rock.

In 1962 a 4th.order lens, propane gas light and tempory foghorn were fitted.

By 1968 A permanent unwatched fog horn had been installed which became discontinued by June 2005.

In June 2007 the lighthouse was upgraded again, extending its range from 12 to 21 miles. Two sets of lens mounted biform on a PRB pedastal with 70 watt Cdmt lamps were fitted, emergency lights, two Sabik LED 350-3 lanterns and three tier LED lanterns (36 watt) were mounted on the balcony.