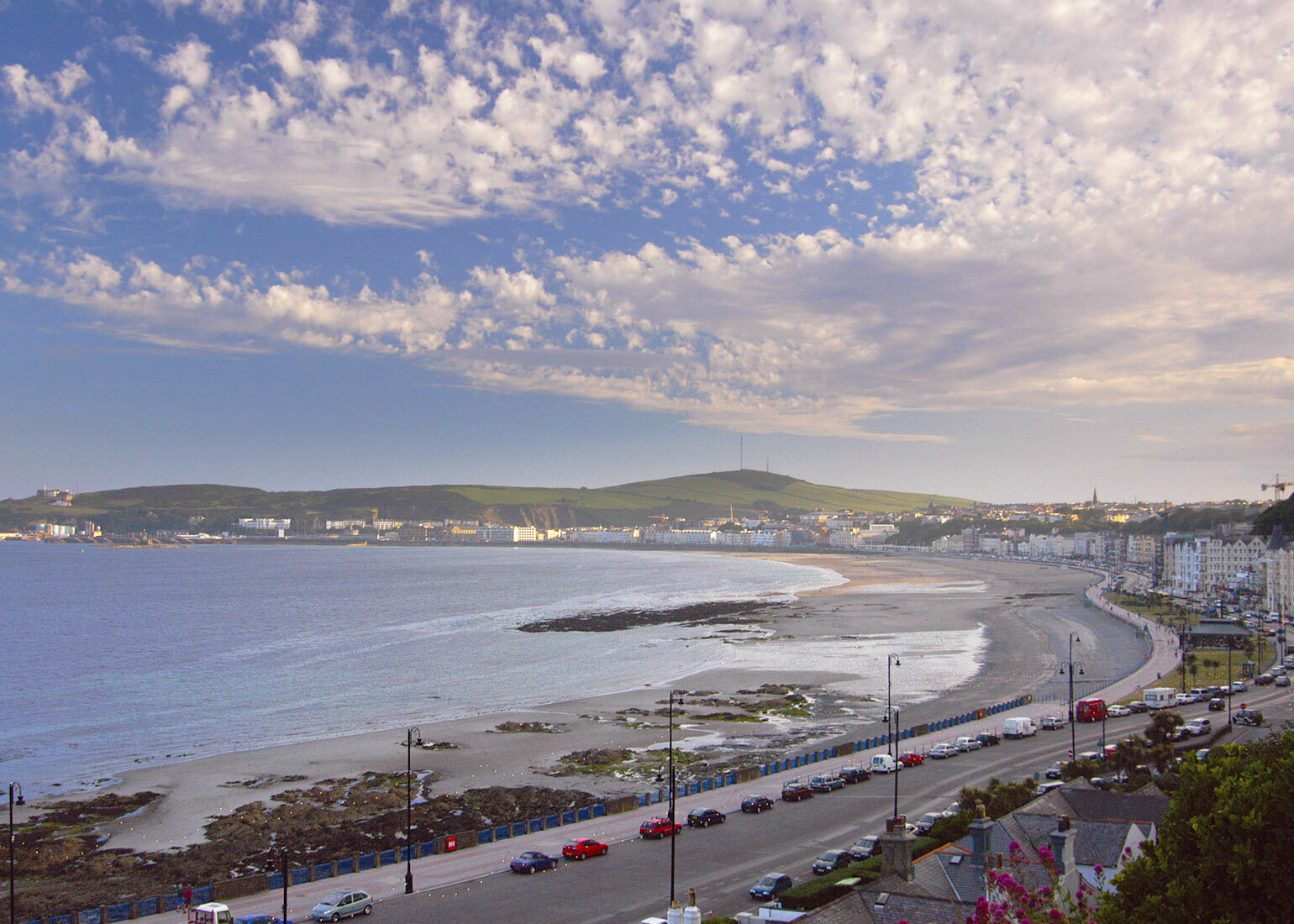 Douglas, the capital of the Isle of Man

Douglas, since 1869, has been the Isle of Man's capital and the main tourist and commercial centre.  Here, too, are the Legislative Buildings of its ancient parliament Tynwald whose origins go back over a thousand years when the Island became a Viking kingdom.

The magnificent sweep of Douglas Bay, against the background of green hills, has a charm hard to equal anywhere.  Douglas was a pioneer in illuminations and at night presents a scene of spectacular beauty, never to be forgotten.

Douglas is the Island's capital and chief town.  It is situated about midway along the east coast and of the Island's population of over 84,497, about 27,935 (census 2011) live within the confines of the town of Douglas.

For a distance of almost two miles, the town fronts onto the magnificent semi-circular bay of Douglas which has Douglas Head to the south and Onchan Head to the north.  Typically, the town extends inland for about a mile.

Douglas is the centre of the Island's Government.  The Tynwald Court, consisting of the House of Keys and the Legislative Council, is located there as are most of the departments of Government.  As the only port in the Island which is not dependent on tides, Douglas handles all the passenger traffic and the bulk of the Island's freight.  It was the first port in the world to install radar.

As well as being the chief seaport, Douglas has the terminii of the Victorian steam railway which runs south to Port Erin and of the electric tramway which follows a scenic route north along the coast to Ramsey.  Both systems arouse keen interest amongst railway enthusiasts.

As the tourist industry developed rapidly in the latter half of the 19th century rows of hotels and boarding houses sprang up along the sea front.  The sea was restrained by the construction of promenades which provide a two mile stroll along the front to 'take the air' and see the sights.  One of these is the Tower of Refuge which has stood as a place of safety since 1832.  It was built at the instigation of Douglas resident Sir William Hillary, founder of the Royal National Lifeboat Institution.

Douglas owes much of its development to the fact that it provides sheltered harbourage from the prevailing winds with Douglas Head and Onchan Head at either end of the two mile sweep of the Bay.  The harbour piers are named after Queen Victoria and King Edward VIII, the latter pier being one of the few public monuments to commemorate the brief reign of this monarch.  The piers have welcomed millions of tourists to the Isle of Man from many parts of the world but mainly from the industrial areas of northern England and Scotland.  They came in the safety of the Isle of Man Steam Packet Company under whose flag more than sixty passenger ships have sailed reflecting the latest in ship design and providing the experience of voyaging in mini-liners.  Today, the harbour is protected by a new breakwater which, in turn, shields the old one which has stood up to easterly gales for over a century.  The piers are equipped with link-spans to give easy access for the thousands of cars that arrive annually and for the container lorries that provide the Island with vital supplies.

The seafront and substantial areas of the town adjacent to it were formerly made over almost entirely to hotels, guest houses, shops and places of entertainment which catered to the visiting industry.  Tourism declined and has been replaced by financial services as the Island's principal industry.  The influx of "off-shore" banks, building societies, insurance companies and other financial institutions created a great demand for office accommodation in the town's business centre.  This has resulted in the conversion of many buildings and the demolition of others to provide sites for large, modern office blocks.  This is an ongoing process.

Along the entire sea front run the Douglas Horse Trams which are now the only ones still in existence.  They began life in 1872 and they remind us of a more leisurely way of life.

Douglas has a modern shopping centre in Strand Street which leads on to the sea front with its hotels and centres of entertainment such as The Gaiety Theatre, now cherished as a gem of Edwardian splendour. Adjacent are the grounds of the Villa Marina with its Royal Hall, which remains the Island's most important venue for a wide variety of events including entertainment and cultural activities.

Modern developments see a gradual change as the Victorian hotels of the last century are either extensively modernised or replaced by new hotels providing the best of accommodation for the tourists of the next century.  Behind the front can be found other places of interest such as the Manx Museum, the centre of Manx National Heritage and a fascinating treasure-house of the Island's unique history.  Sports facilities available at the National Sports Centre at King George's Park rank high in quality for the enthusiast.

Noble's Park provides many sporting activities and leads to the Grandstand from which the world famous TT Motorcycle Races are controlled.

Spending a Day in Douglas

The seafront at Douglas consists of a continuous series of promenades extending along the entire length of the bay.  These provide a relaxing walk from the pier sea-terminal building, at the southern end, to the horse tram and electric railway depots to the north.  What better way to get some healthy exercise and to give one an appetite for lunch?

The pier terminal building has a slender spire rising up out of its centre and, because of its shape, is often referred to locally as the lemon squeezer.  Looking out to sea, the castle-like Tower of Refuge on Conister Rock will be seen.

The first of the promenades, the Loch Promenade, was constructed on land reclaimed from the sea in 1863.  Lined on its inland side by brightly painted hotels and guest houses, its seaward side is occupied by sunken, ornamental gardens which are a riot of colour from Spring until Autumn.  The gardens come to an end at the town's War Memorial which is surmounted by a "British Tommy" of the 1914-18 war.  Opposite is St Thomas's church with its prominent clock tower.

We are now on the Harris Promenade.  On the left is the Gaiety Theatre and Opera House.  Next to the Gaiety are the sheltered gardens of the Villa Marina, a large, octagonal shaped building at the foot of Broadway, in which entertainments are staged in its Royal Hall.

Beyond Broadway we have Central Promenade and more hotels and guest houses dating from the Victorian period.  The Esplanade is a good example of architectural symmetry. A short distance further on, set high above the promenade is the Falcon Cliff.  This castellated, white-finished building dates from the 1840s when it was built as a private residence.  It is now used as office accommodation.

In an arbour at the foot of Summerhill is a bronze statue of Sir Hall Caine, the celebrated novelist.  This completes our stroll along the sea front.  As we are now close to the horse tram terminus, a ride on these relics of the Victorian era would be a pleasant way of returning.

As we approach the Gaiety Theatre on our return journey, we are near to Manx National Heritage which won the award of the British Isles Museum of the Year for 1992-93.  There is no entry charge and it deserves to be high on the visitor's list of priorities.

The financial and commercial sectors of Douglas are found seaward and to the south of a line based roughly on Circular Road and Finch Road.  The main shopping streets run behind and parallel to the Loch promenade.

Further inland from the sea front are the older residential areas of Douglas resulting from last century's expansion as the town prospered and grew.  Still further inland will be found the modern housing estates built in the post-war period.  Expansion along the coast to the north is not possible because of the existence of the district of Onchan which is a separate local authority.  It is unlikely that building would ever be permitted on the scenic coastline to the south of Douglas.  The town has several small squares each with its own ornamental garden.  Noble's Park, close to the TT grandstand, is a large open space for recreational purposes.

In the evenings, the semi-circle of the promenades is outlined by a blaze of decorative lighting which is reflected a thousand times over as it sparkles in the waters of Douglas Bay.  If you holiday in Douglas, you have a convenient base from which to explore the rest of the Island.  If you choose to stay outside of the capital, a visit to Douglas will prove rewarding.