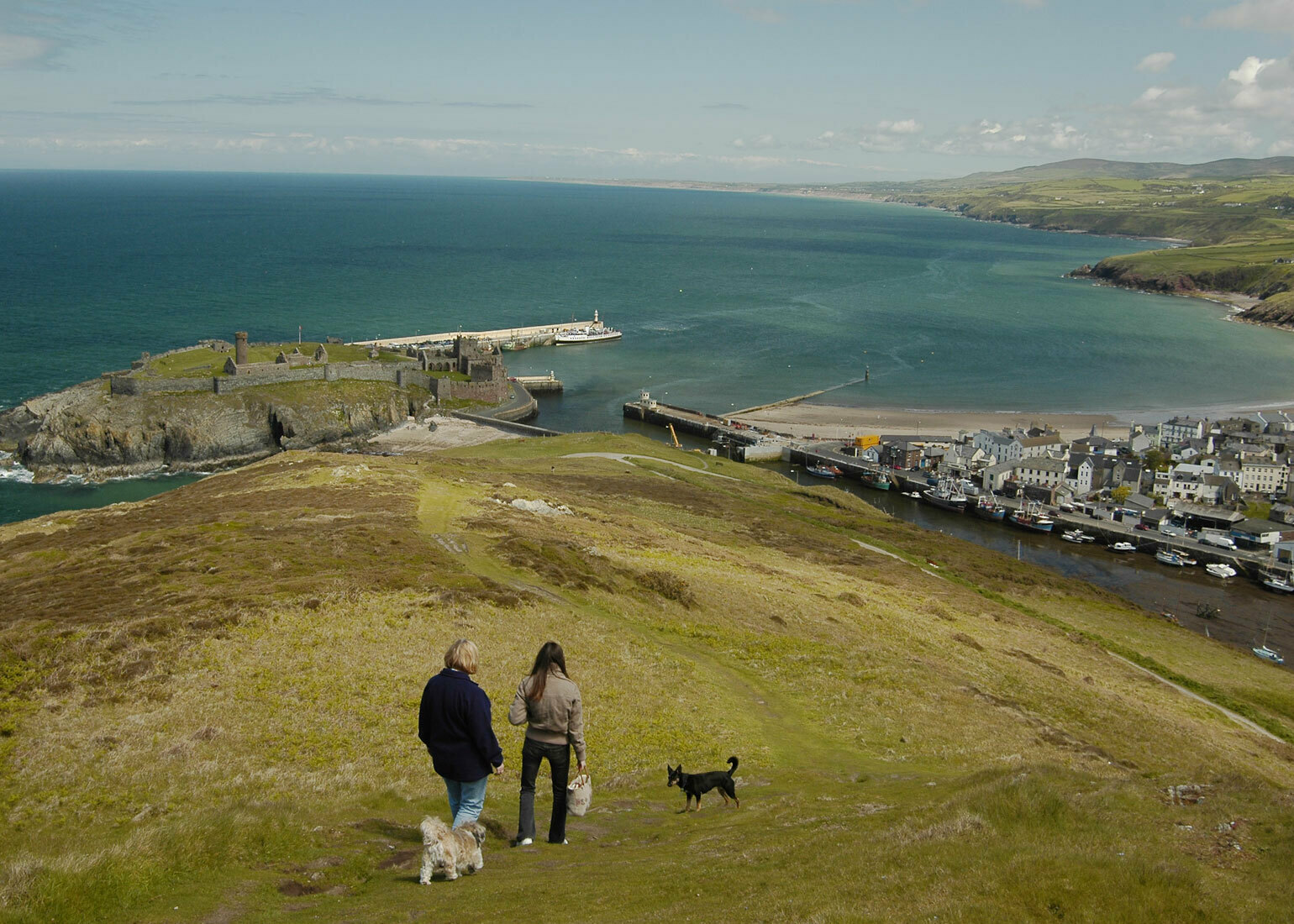 Peel is the centre of the Isle of Man's fishing industry

Peel (POP. 5,092), anciently called Holme, or Holme Pile, is situated in the parish of Kirk German, on the west coast at the mouth of the river Neb and is affectionately known as Sunset City.  It does indeed see some spectacular sunsets throughout the year, made all the more memorable by the magnificent ruined castle that stands on a small island at the west end of the town.  Amongst its ruins is an ancient Celtic cathedral dating from the 13th century.  It is this cathedral that makes Peel into a city, or so the locals will claim! The cathedral is surrounded by the pink sandstone walls of Peel Castle, which dates from the 14th century.

The name 'Peel' is a corruption of the word 'pile' which refers back to the stockade or enclosure which was there in medieval times, but the ancient Gaelic name for Peel is Purt ny Hinshey, which means 'Port of the Island'.

With its sandy beach, breakwater and harbour, Peel has an enchantment of its own.  The narrow streets once witnessed the clandestine smuggling activities of the eighteenth century.  Today, fishing boats and the accompanying herring gulls are ever present making Peel the centre of the Island's fishing industry.  A quota system has seen the export of salted herring to the Continent much reduced in recent years but there are still some to supply the curing houses which produce the famous Manx kipper of unbeatable quality.

The 'Story of Mann' continues at the House of Mannanan and is a major attraction for young and old alike.  Constructed with a concentration on audio-visual displays, the centre takes visitors through all aspects of Manx history and folklore.

Peel's narrow streets, mostly built of sandstone, are full of character, and it's here that you are likely to find speakers of Manx Gaelic, the ancient tongue of the Isle of Man, as well as being able to enjoy some fine Manx traditional music played at one of the many 'sessions' in local pubs.

To the south of Peel the coastline changes to one of grandeur as cliffs of Manx slates rise steeply from the sea and lead to the remotest part of the Isle of Man.  The Glen Maye stream has carved a gorge in which is found one of the prettiest glens managed by the Manx Government's Forestry Department.  Beyond is the delightful cove of Niarbyl with its 'tail of rocks' resisting the waves.  The cove contains an old fisherman's cottage, known as 'Old Tom's', now preserved as a private dwelling. Southwards, Cronk ny Irrey Lhaa with its wild moorlands rises steeply from sea level to its 1,500 feet summit.  Its name means 'Hill of the Break of Day', so called because men of the fishing fleet returning to Peel after a night at sea looked for the sunrise over it.  The coastline continues until Bradda Head is reached while the Calf of Man can be seen in the distance.

A tiny island, at the edge of the bay, is called St Patrick's Isle.  Tradition has it that the great Irish Saint stepped ashore here in the 5th century to bring Christianity to the Manx.

Miles of sandy beaches stretch southwards from the Point of Ayre until the port of Peel is reached, the rocks changing to red sandstone.  This predominates in the construction of the ancient Castle and ruined Cathedral on St Patrick's Isle.  Here the first Irish missionaries arrived in the middle of the 5th century.  A tall round tower, still standing, was built by the monks as a place of refuge from the marauding Vikings.  This little isle was to become a base for Viking settlers and a fort of timber, or pile, was built thus giving Peel its name.  Great devastation followed the end of Norse rule and it was the early English Kings of Man who laid the foundations of the Castle and walls we see today, the oldest parts dating from the end of the fourteenth century.

A century earlier work had begun on the Cathedral at the instigation of Symon of Iona who had been appointed Bishop by Olaff II, one of the last Viking Kings of Man.  The Cathedral, named after St German, a former bishop, took over two hundred years to complete but was always in need of repair.  The roof was replaced in 1697 but by 1785 the Cathedral had become so dilapidated that it was no longer fit for divine service.  In recent years an archaeological 'dig' has attracted world-wide interest.  Here has been revealed evidence of continual occupation spanning 2,500 years.  Graves of the early Christians contrast with those of the later Viking settlers.  One such grave is that of a Viking woman, now known as 'The Lady of Peel' whose remains were found with beads, a cooking spit, shears and workbox.

The town of Peel has flourished over the centuries partly because it has provided services for the Castle and Cathedral, and partly because it became, in the 19th century, the main fishing port for the Island.  Many hundreds of boats would go out from Peel each season, bringing back thousands of tons of herring from the Irish Sea and beyond, and boats from Scotland and Ireland would also land here.  Hundreds of people were employed in the industry, curing the herring by cooking them over smouldering oak chippings to make them into kippers.

Other places to visit near Peel: