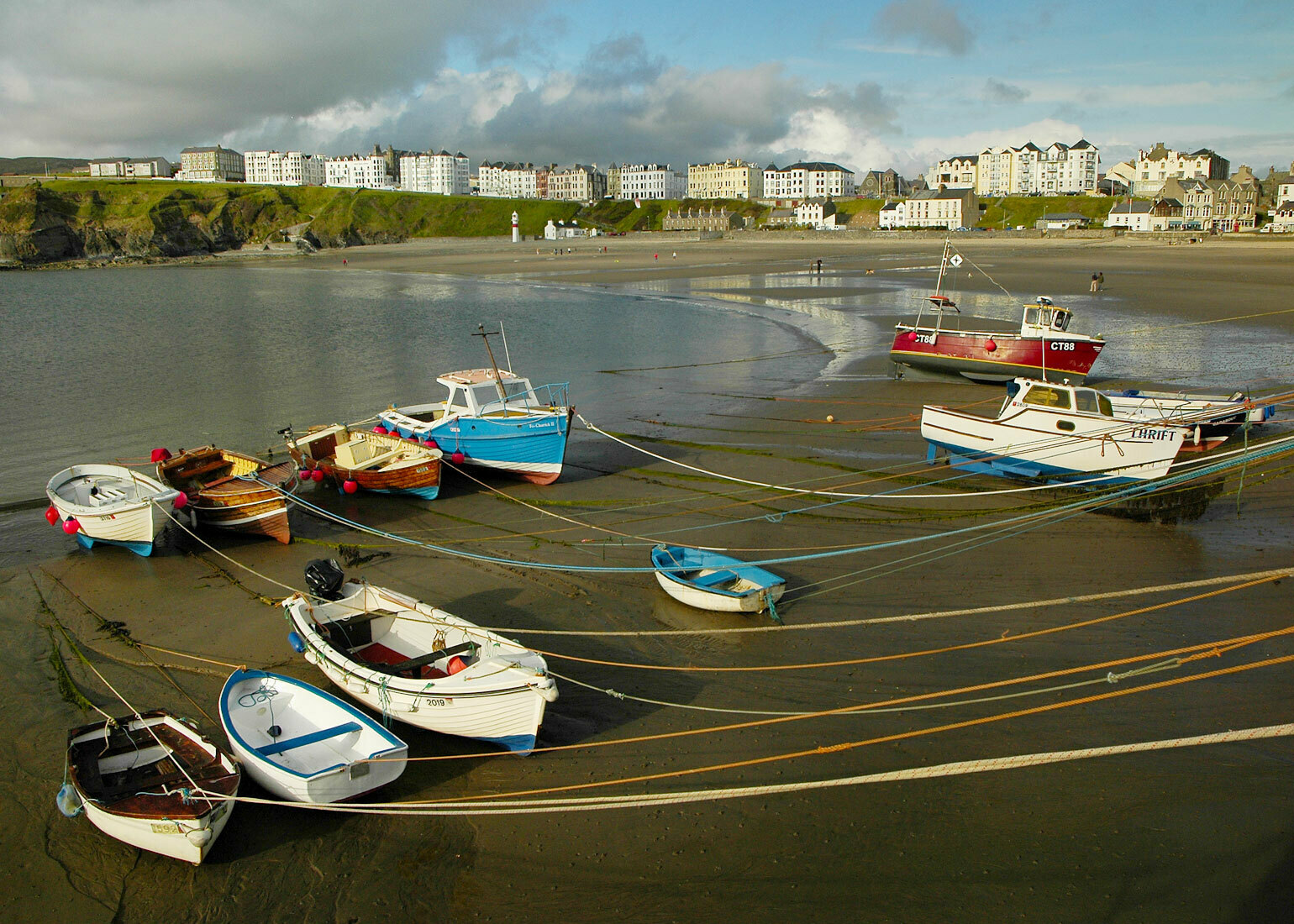 It matters not which direction you approach Port Erin, there is one common denominator, the impressive views.  Translated from the English it means either the Lord's Port or Iron Port and in Manx Gaelic it is written as Purt Chiarn.  Latter day smugglers came to know Port Erin very well, using the solitude of the bay to mask their activities and kept safe from observation by the steep hills and perpendicular cliffs surrounding the village.

Today, Port Erin with its population of 3,531 (2011 census) is popular for those seeking a relaxed holiday with superb coastal scenery and many fine walks.  Situated at the head of an almost landlocked bay, guarded to the north by lofty Bradda Head and the Mull Peninsula to the south, Port Erin offers a sheltered play area in most weathers. Pretty white painted cottages trim the shoreline and a more formal promenade of hotels stands sentinel on the cliffs above.

There are fishing trips and excursions to the Calf of Man from the small harbour. Railway enthusiasts can enjoy the Museum and the Station refurbished in authentic Victorian splendour.

South of both Port St Mary and Port Erin roads lead to the tiny village of Cregneash, where The Manx Museum and National Trust maintain an outdoor Folk Museum, the centre of which is the famous Harry Kelly's Cottage built in the early part of the eighteenth century.  The interior of the two rooms and loft is complete with furnishings and objects evocative of the Manx crofting way of life that persisted to the 20th century.  The farmstead is complete with a woodworking shed, smithy and a weaver's cottage where demonstrations are given during the summer months.

Cregneash overlooks the Sound which is a treacherous stretch of water separating the Isle of Man and the Calf of Man.  The name of the little isle comes from the Scandinavian kalfr meaning 'little island next to a larger island'.  The island was once farmed but is now a bird sanctuary administered by the Manx National Trust, wardens occupying the farmhouse during the summer months.  Over 120 species of birds have been recorded.  Facing south towards Chicken Rock a modern lighthouse, now fully automatic, stands near the ruins of the former lighthouse dating from 1818.  A flock of loaghtan sheep roam the grassy areas and supply wool for the weavers of Cregneash.  The only other visitors are those travelling by boat from either Port St Mary or Port Erin to enjoy the adventure walking on this enchanting isle.

Port Erin was a tiny fishing village before the advent of tourism saw it rapidly develop into a favourite family holiday resort with hotels banked on the slopes overlooking the almost circular bay which protects the sandy beach.  The remains of a breakwater, built to provide a safe haven for the fishing boats, can still be seen.  Built of concrete blocks it survived for ten years until it was destroyed in a particularly fierce storm in 1864.  More enduring is the landmark of Milner's Tower on Bradda Head.  It was built in 1871 by public subscription as a memorial to the benefactor of Port Erin who did much to help the village fishermen and the poor.  William Milner was a famous safemaker from Liverpool and the unusual shape of the Tower represents a key.

In more modern times it built its prosperity on the holiday makers, becoming the playground of the Lancashire mill owners and their employees.

Other place to visit near Port Erin: