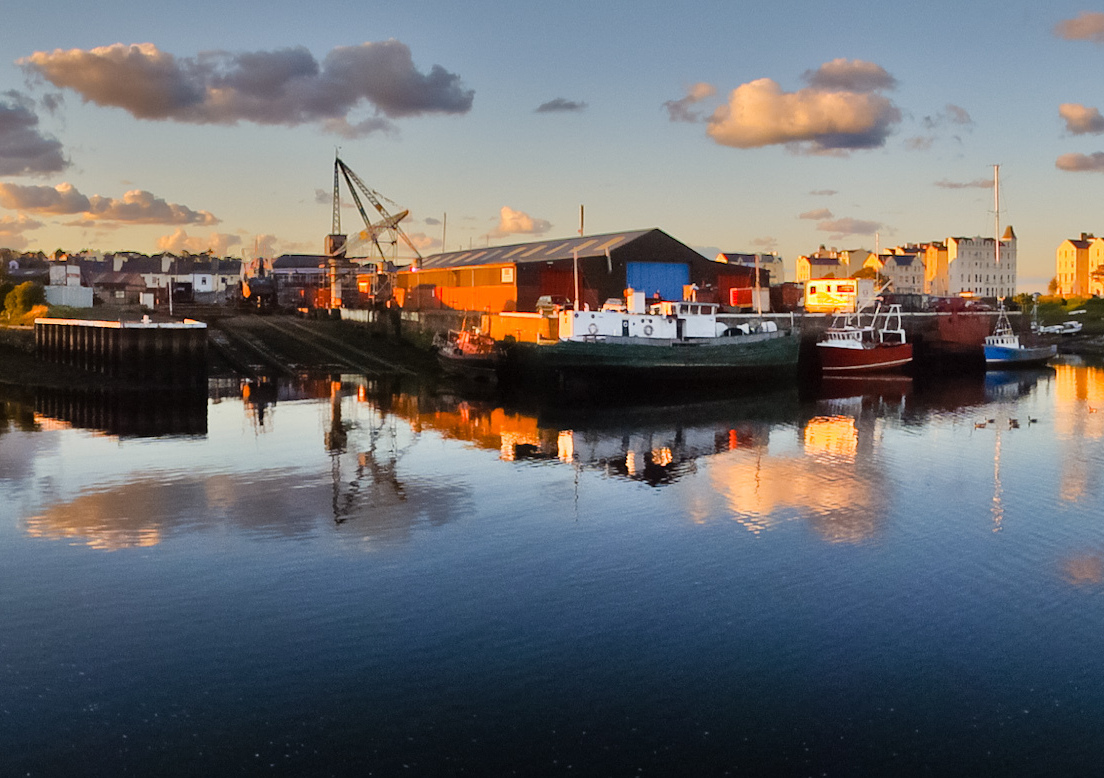 Ramsey, in the north, is the Isle of Man's second largest town

Sheltered beneath the slopes of North Barrule lies the northern town of Ramsey which, with a population of 7,809 (census 2011), is the Island's second largest town.

Now a thriving market town, new industries are ensuring that Ramsey is enjoying a leading position in the commerce of the Isle of Man.

It is through Ramsey harbour that the Island's longest river, the Sulby, enters the sea after cascading through the deep Sulby Valley below the Sulby Reservoir.  A slower and more tortuous route under the northern foothills leads into the waters of the tidal harbour where there is always plenty of activity with the coming and going of local and visiting yachts, trawlers and coasters.  The harbour also has a ship repair and building yard visited by fishing boats from all around the Irish Sea.  TheManx Sailing and Yachting Club has its headquarters here from where the Round the Island races are organised.

Behind the miscellany of quaint buildings along the quay is the shopping thoroughfare of Parliament Street while the old Market Square leads to the St Paul's shopping precinct.  Nearby is the heated swimming pool while the beaches on either side of the harbour entrance have fine stretches of sand.

On the outskirts of Ramsey is the Grove Rural Life Museum, which charmingly displays the furnishing and equipment of a country home of the nineteenth century.

Crossing the harbour is the fine old swing bridge leading to the north shore with its promenade and the Mooragh Park, Ramsey's main attraction for visitors.  The Park was created a hundred years ago out of the old river bed and mud flats.  With considerable ingenuity forty acres were reclaimed and laid out with footpaths and gardens, sub-tropical plants helping to make a riot of colour in the summer while being able to survive the generally mild winters.  The many palms growing here add to the exotic appeal of the Park.  There is also a twelve acre lake for sailing and rowing boats.  There are plenty of activities for young and not so young which help to make the Mooragh Park a great favourite with visitors and locals alike.

It was here that Queen Victoria and her Consort, Prince Albert, arrived unexpectedly in 1847. Recovering from sea-sickness Queen Victoria remained on the Royal Yacht, but Prince Albert ventured ashore and was taken by local tradesmen to a hill overlooking Ramsey from where the royal visitor admired the panoramic view of the north of the island.  So delighted were the townspeople that they erected the Albert Tower on the spot where the Prince stood.  The Tower is the most familiar landmark in the north.  Ramsey was also the landing place for the Viking warrior Godred Crovan who was determined to subjugate the island and make it his kingdom.  Two miles inland, on Sky Hill, was fought the most important battle in Manx history which resulted in two hundred years of Viking rule, thus forming the basis of the Manx nation and many of the traditions that continue today.

In the ancient Chronicles of Mann, circa 1250, the monks of Rushen Abbey have faithfully recorded the name of the most northerly town as Ramsa.  Seemingly drawn from the old Scandinavian language it is translated as Wild Garlic River.

Ramsey has a distinct lack of old buildings having suffered much destruction across the centuries.  Olaf, King of Mann was murdered by his nephew Reginald near the harbour in 1154 and a couple of centuries later Robert the Bruce (of spider in the cave fame) passed through on the way to besiege Castle Rushen.  Ramsey has been the gateway for invasions peaceful and not peaceful for aeons and with the building of the imposing Queen's Pier in Victorian times, landing became much easier.

Ramsey is the only town to boast an iron pier which was built in 1886 reaching into Ramsey Bay.  It helped Ramsey develop into a favourite resort, but like many of its Victorian contemporaries, the pier is succumbing to the ravages of time and the sea, although work has recently been undertaken to stabilise it.  King Edward VII and Queen Alexandra landed there in August, 1902, thus helping the town to claim the title "Royal Ramsey".