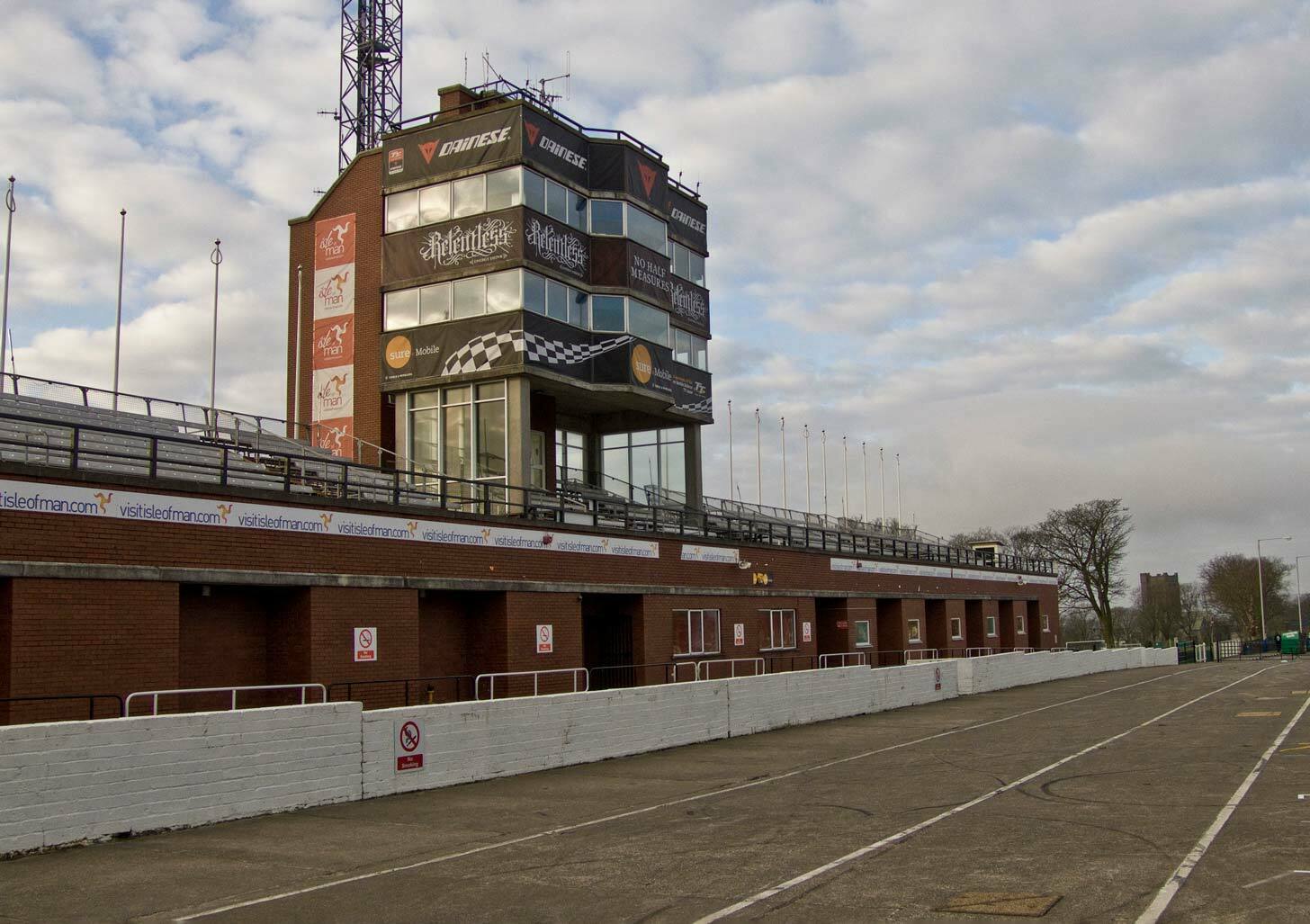 The grandstand is the start and finish area of the famous Isle of Man TT motorbike races, offering fans an unbeatable view of all the action.

The original TT Grandstand was the responsibility of the Auto Cycle Union. Each year they put it up and took it down. By 1921 complaints were being made about the cost for assembling and dismantling the grandstand. During the same year other issues were raised, such as the need for a crane to lift motor-bikes from ferry vessels, the abolition of road taxes, improvements to the course and the ability to race on Sunday. These issues turned into disagreements and there was talk of moving the TT to Belgium. After much debate, Douglas Town Council yielded to the words of George Brown from the Isle of Man Weekly Times, who spoke on the behalf of the Auto Cycle Union Committee. The needs would be met and Douglas Corporation built a new permanent TT Grandstand. The future of the TT on the island looked secured.

In 1960, the Douglas Council acquired 17 acres of land next to Glencrutchery Road. It was from this site that repairs and improvements to the TT Grandstand were made over the years which followed. In 1985, a piece of land was dedicated to the Isle of Man Tourist Board as the site for a new Grandstand. This is the TT Grandstand used today.

In Upper Douglas, near Nobles Park on Glencrutchery Road.

Getting to the Grandstand

Travel to Douglas and then along the sea front, turn onto Broadway and then at the road split take the right road (Ballaquayle Road). At the next main road turn right onto Glencrutchery Road, which will shortly lead to the Grandstand.

Douglas can be reached using most main bus routes: 1's, 2's, 3's, 4's,5's, and 6's, as well as many other minor routes. On the island most routes leads to/from Douglas. From the promenade follow the route taken by vehicles above or take a bus going to Willaston.

By Electric Railway, take the trams heading to Douglas. Then walk along the Promenade following the route taken by vehicles above (about a 20 minute walk) or take a bus going to Willaston.

By Steam Railway, take the train to Douglas and then walk along the Promenade following the route taken by vehicles above (about a 20 minute walk) or take a bus going to Willaston.

Getting Seats in the Tourist Trophy (TT) Grandstand

Tickets for the Grandstand can be bought at the TT Marshals Association Portacabin behind the Grandstand. Seat are easily reached from Nobles Park and those wishing to come and go between races will find no access problems.

Views from the the Grandstand are excellent. The start of the race can be seen clearly as can the pit stops just below the Grandstand seating. Running commentary is provided and the winners of races are presented at a podium in front of the Grandstand. Food and toilet facilities are conveniently located behind the Grandstand.