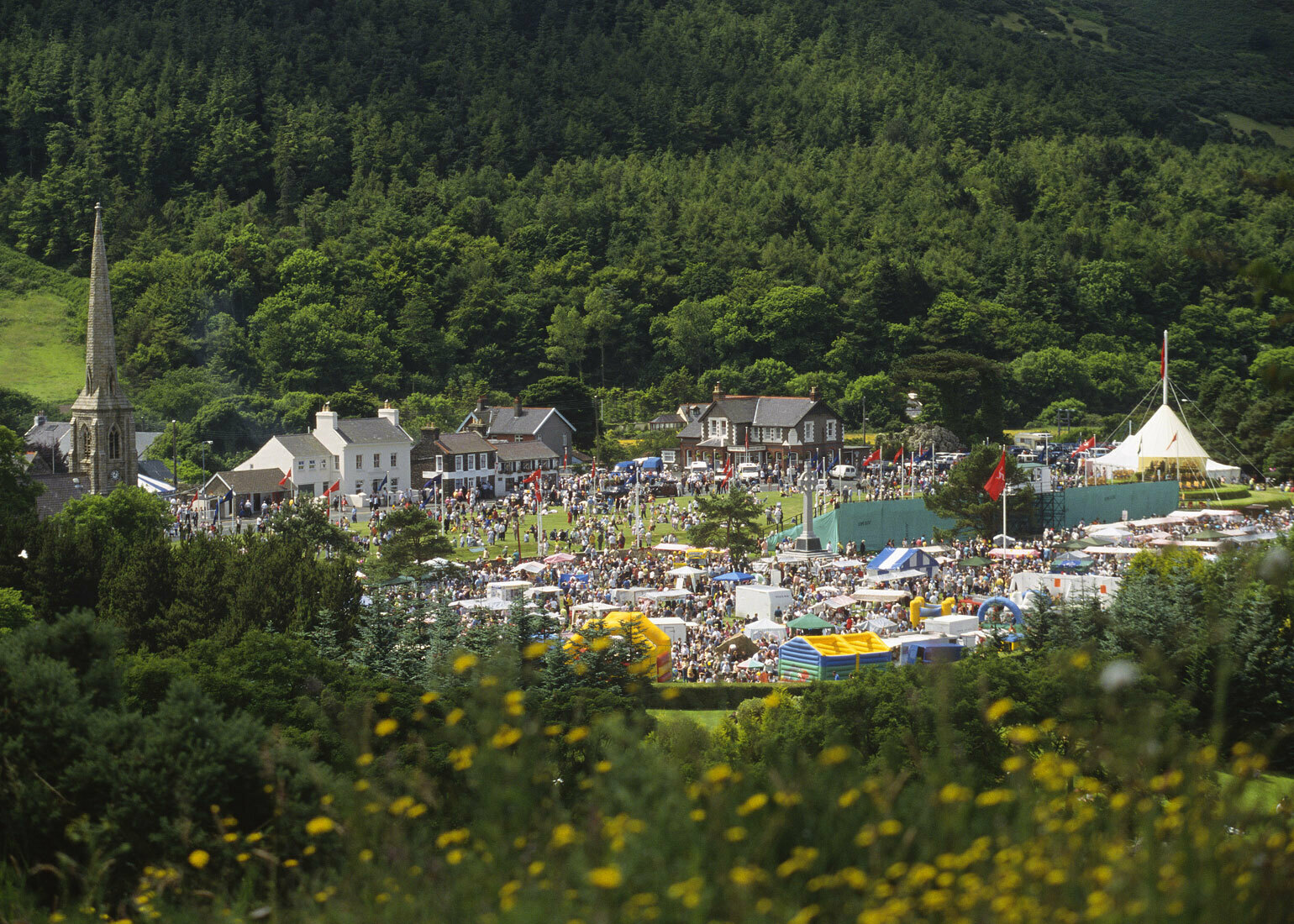 St John's in the Isle of Man is home to the famous Tynwald Hill, the centre of the Manx Parliament

The village of St John's lies not only at the geographical heart of the Isle of Man, but also at the heart of the Island's sense of nationhood.  Since Viking times, St John's (named after St John the Baptist, whose festival is mid-summer's day) has been the focal point of Tynwald Day on the 5th July.

On the northern edge of the village is the Tynwald Mill, a traditional woollen mill dating from 1703, which in its day, was the largest on the Island, but now the area has been developed into a modern craft centre.  There are shops, two cafés and a children's playground at Tynwald Mills set in beautiful surroundings with ample free parking.  The shops at Tynwald Mill are a popular destination with locals and tourists alike.

The ceremony on this Manx National Day has continued unchanged for more than 1,000 years.  The annual outdoor sittings of Tynwald, the Manx Parliament, date back to the 8th century when the Norse rulers of the Island introduced their own system of government called 'Thing-vollr'.  No other parliament in the world has such a long unbroken record.

The main focal point for this ceremony is Tynwald Hill, situated in the centre of St John's.  This four-tiered artificial hill, reputed to be constructed from soil brought from the 17 parishes, symbolises the whole Island.  The hill is twenty feet (3.6m) high, while the lowest tier has a circumference of 256 feet (78m). Tynwald Hill faces St John's Chapel and the two are joined by a 360 feet (110m) long processional way.  St John's the Baptist Chapel itself, built in 1849, has been constructed on the site of former chapel and an ancient keeill.  The chapel has special seating arrangements to accommodate the Tynwald court, held on 5th July every year.

Tynwald Day is also a Manx national holiday and alongside the pageantry and formal ceremony there is a fair field directly behind Tynwald Hill and displays of traditional music and dancing.

Situated at the west end of the Island's central valley, St John's village has developed as a result of its location.  Firstly, it is at the crossroads between Douglas-Peel and Ramsey-Castletown, and when the railway age came to the Island, St John's was the junction where the Isle of Man Railway and Manx Northern Railway met.  Similar to Crewe, the coming of the railways in 1870's was the catalyst for growth for this sleepy little Manx village.  The steam railway from Douglas to Peel and Ramsey sadly closed in 1968, but the trackbed still remains as a heritage trail for walkers.  The almost level former railway line is ideal for a stroll though the Manx countryside.  The hedges on the way contain rare wild flowers and unusual species of butterflies.

At the rear of Tynwald Hill is one of the Island's real hidden delights -St John's Arboretum, which is also the National Park.  This beautiful and relaxing leafy pasture has been planted with trees given from all of the Manx parishes in 1979 to mark the Millennium of Tynwald. It's an ideal location for a picnic, but don't forget to take extra bread in your basket as the Arboretum at St John's contains a lake with some rather hungry ducks!

For the more enthusiastic walker, energetic enough to climb Slieau Whallian, the steep wooded hill which lies to the south of St John's, splendid views of the village, the St John the Baptist chapel, the processional way and the four-tiered artificial mound known as Tynwald Hill can be found.  Slieau Whallian's summit features blocks of Galloway granite deposited by ice-age glaciers. The hill is also well known in Manx folklore as the 'Witches Hill'. Suspected witches were placed in spiked barrels and rolled down the slope.  If the poor victim was still alive at the bottom of the hill, they were judged to be witches and put to death at the stake! However, there is no hard evidence to support this gruesome story.