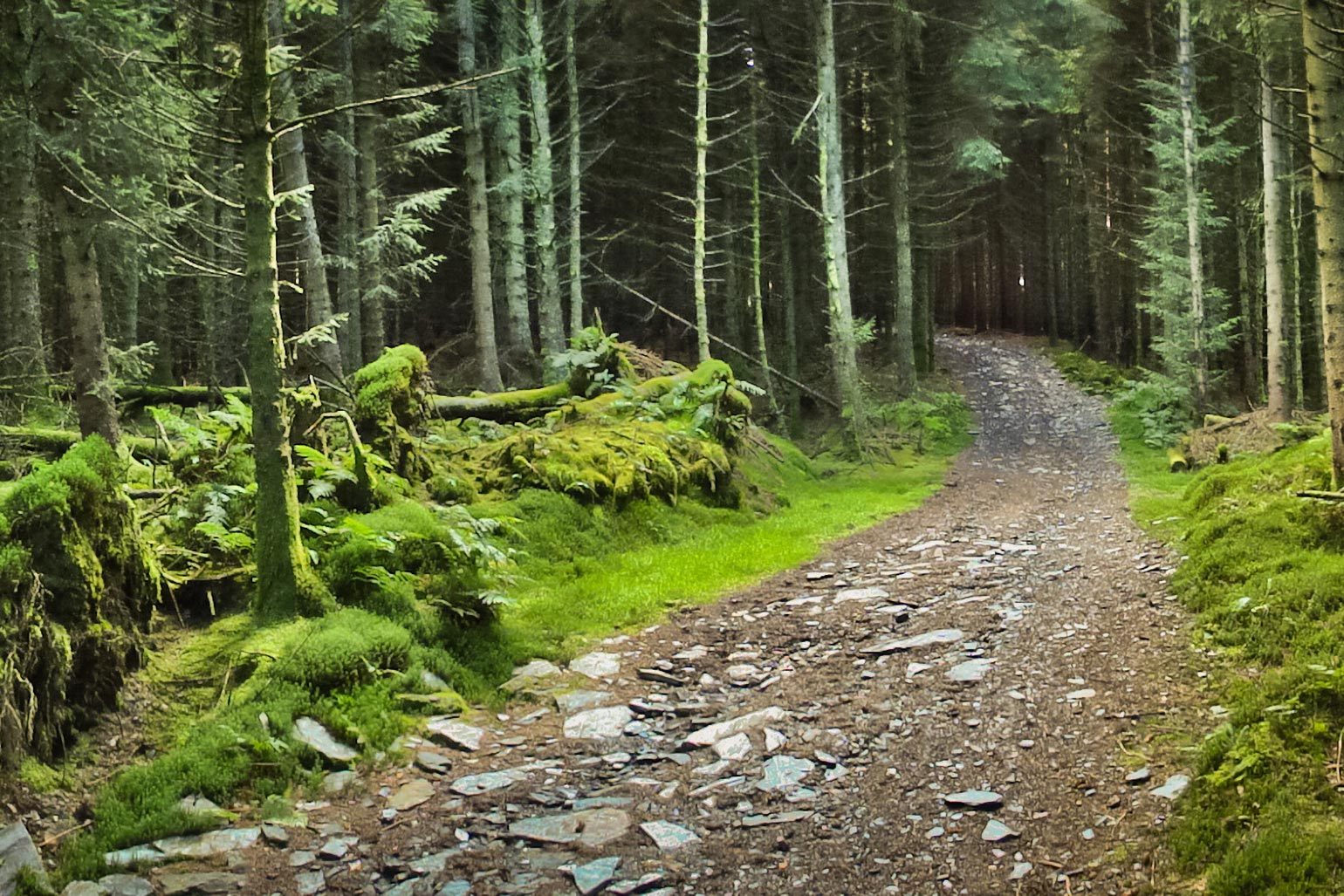 Between 1860 and 1870 the Crown purchased three areas of rough, mountainous scrubland, in the middle of the southern part of the Island, from the Disafforesting Commissioners, and twenty years later our three main plantations were created.  These Crown Plantations are Barrule, Archallagan and Greeba (known as The King's Forest).

The growth of the trees planted was slow.  The soil was poor, the sites were exposed and they had dense coverings of heather and gorse.  When felled, in 1923, a typical tree in Barrule showed that it had taken 13 years to grow 6 feet in height and another 16 years to reach 12 feet.  The last 8 1/4 feet however were put on in only 8 years.  Speculation on the cause of this increased vigor was that as long as the canopy was incomplete, weed growth would have occupied the soil and the trees would have offered little resistance to the wind, but, as the trees closed over, weed growth was killed and the roots of the trees would begin to function normally.

A selection of species of trees had been planted and it was remarkable that in each of the three plantations, which were relatively close to each other in point of distance, each had exhibited a different species thriving under the adverse conditions of soil or exposure.  At Barrule it was the Sitka Spruce, at Archallagan it was the Corsican Pine and in Greeba Plantation the European Larch and Douglas Fir were the dominant ones.

These forests were administered by the Commissioners of the Office of Woods and Forests, through the Crown Receiver to the Isle of Man, Mr J R Drinkwater of Douglas.  Mr Jamieson was the Chief Forester and he lived close to his work in the Forester's House in Barrule Plantation.  Anxious to have woodlands under local control, a group of volunteers, who were backed by Tynwald financially, formed themselves into the Isle of Man Arboricultural Society.  One of the founder members of this group was William Farrant MHK.  They planted thousands of trees well into the 20th century and this resulted in the emergence of Slieu Whallian and Tholt-y-Will Plantations.

The Forestry, Mines and Lands Board was created in 1931.  In 1986 it was incorporated into the Department of Agriculture, Fisheries and Forestry, now the Department of Environment, Food and Agriculture (DEFA).  A major expansion of forestry took place between 1986 and 1996 when a further 2000 acres was added to the former total of 5000 acres.

The Present and Future

Recreational use of the Plantations

Unauthorised access for some activities is of increasing concern and therefore permission must be sought when organising any event. This is for both the benefit of the environment and the participants.

Improved access has been achieved by the provision of styles or kissing gates in forest fences.  Improved way-marking is also being implemented as is the provision of adequate car parks to facilitate access to plantations and adjacent areas of hill land.  New car parks have been built at Ballure (in conjunction with the Water Authority), Arrasey, Chibbanagh and Cringle in recent years.

The Forestry, Amenity and Lands Division allows horse riding in many of its plantations.  This offers enjoyable hacking in safe and scenic surroundings.

A licence and gate key can be obtained for an annual fee.

Children under 16 must be accompanied by an adult.  Horse riding in the allocated plantations is only allowed to licensed persons. Riding in other plantations or in the National Glens is not permitted.

These plantations are reviewed at intervals to monitor any damage and to allow the plantation to recover from poaching.

This is an increasingly popular sport and organised events are regularly held.  Plans to develop this activity linking defined routes within the plantations with Public Rights of Way continue.

Picnic tables have been installed in a number of the plantations where there are exceptional views out over the distant countryside.

Some areas are known to be of conservation interest, especially areas of peat wetlands and remnants of heather moorland found within the plantations.

Open glades, such as those at Ballaugh can also provide wildlife interest, especially when associated with areas of water.

The Classroom in the Forest

The "classroom in the forest" at South Barrule is frequently used by school groups to undertake nature studies.

Organised vermin shoots are arranged with recognised groups throughout the season in areas where there are no close private residences.

Car rallying is consistently popular and the increasing length of forest roads are improving facilities year on year.  Between 1995 and 1999 there was a roading programme which provided 7 km of forest road.  And it is estimated that a further 5-km will be provided to give access for harvesting within the older plantations.

Motorcycle events are periodically held in the plantations and associated quarries.  There has been unauthorised access by trial bikes, which gives rise to concern regarding damage or injury to others.  It is hoped to increase the number of organised events held, providing this can be achieved on a sustainable basis.

View all Isle of Man Plantations