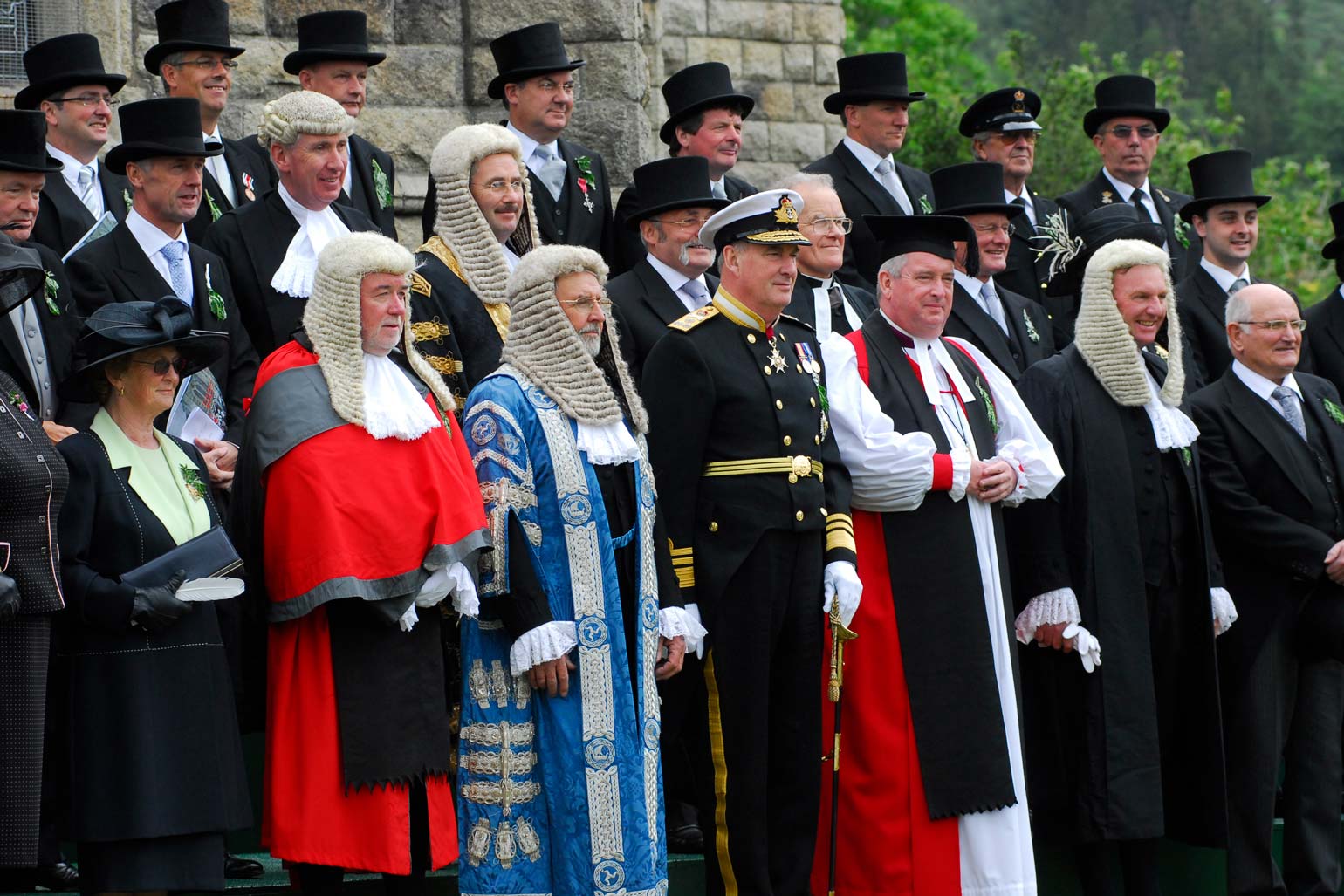 The government of the Isle of Man is a parliamentary representative democracy. The island is a Crown Dependency which, through its ancient parliament Tynwald, enjoys a high degree of domestic legislative and political autonomy.  The United Kingdom Government is though, by convention, responsible for the conduct of the external relations and defence of the island.

The King, Lord of Mann

For many centuries the Stanley family (the Earls of Derby) were feudal Kings or Lords of Mann, but in 1765, the Island was purchased by the British Crown.

His Majesty King Charles III is therefore Lord Proprietor of the Island and is formally referred to on the Island as 'The King, Lord of Mann.'

The Monarch is officially represented on the Island by the Lieutenant Governor - a position that for many years saw the Governor as the executive head of the Government.

However changes have been made to the role and these powers of office have been transferred to the Council of Ministers or other departments.

Today the position of Lieutenant Governor is largely ceremonial, although they do retain some important constitutional duties.

The Lieutenant Governor is the personal representative of the King on the Island.  They are appointed by the Sovereign, on the advice of the Home Secretary and with the concurrence of the Government of the Isle of Man, and usually serves for a five year term.

Formerly, the Lieutenant Governor was, in essence, the executive head of the Government on the island. However in the last decade the role has become somewhat more vice-regal as many of the governmental functions have now been transferred to the Council of Ministers or to Government Departments.

In exercising the majority of their remaining functions, the Lieutenant Governor acts on the advice of, and with the concurrence of, the Council of Ministers.

However, they do retain some important constitutional duties.  In respect of parliamentary matters, for example, the Lieutenant Governor may dissolve the House of Keys and may, since 1981, grant Royal Assent on behalf of the King to designated Bills passed by Tynwald.

The Lieutenant Governor usually presides over the St John's Ceremony, however if a sovereign is present on the Island, it is customary for them to do so instead. In addition, other members of the Royal Family may also preside, under Letters Patent granted for that purpose.

The President of Tynwald

The President of Tynwald presides over Tynwald when it sits in Douglas, and also in the Council.

They are responsible for order and the conduct of business in Tynwald and Council, and are elected by the members of Tynwald from amongst their own number.

The Presidential term is five years. Prior to 1990, the Lieutenant Governor presided over Tynwald and, before 1980 over the Legislative Council.  Since 1990 the Council has elected its own President.

The House of Keys

The House of Keys is the Lower Branch of Tynwald and is directly elected by the people of the Isle of Man; a General Election is held every five years.

In exceptional circumstances, however, the House could be dissolved and a General Election held within that period.

For many centuries, it has had a membership of twenty-four (in Manx, 'Kiare as Feed'), although when the Kingdom of Mann and the Isles existed, it had representatives from the Hebrides and numbered thirty-two.

The Legislative Council is the Upper Branch of Tynwald. It consists of eleven members: eight elected by the House of Keys and three ex officio members - the President of Tynwald, the Lord Bishop of Sodor and Man and Her Majesty's Attorney General.

The term 'Sodor' in the Bishop's title refers to the medieval diocese, which used to include the Hebrides, also known as the 'Sudreys' or Southern Isles (as opposed to the 'Nordreys' i.e.  the Orkneys and Shetland).  Historically, the Bishop was a Baron and, as a Lord Spiritual, a member of Tynwald.

The eight members of the Legislative Council that are elected by the House of Keys have terms which expire in the February following the fourth anniversary of the date of election.

Although elected by the Keys (not infrequently from among its own members) the elected members of the Legislative Council are not controlled by, or delegates of, the House of Keys.

Elected as an MHK, The Speaker is responsible for order and the conduct of business in the House of Keys.

The House assembles immediately after a General Election to elect a Speaker of the House from amongst its own members. The Speaker presides in the House and is responsible for order and its conduct of business.

In Tynwald they are the spokesman of the House, although they attend as an elected member and also has the same rights and duties as other elected members.

Officers of the Court

Several Officers are appointed, whose roles are to assist in the workings of Tynwald and other aspects of Government.

The Clerk of Tynwald

They are responsible for maintaining a record of the proceedings and, as Counsel to the Speaker, they advise members on Bills coming before the Branches.

They also hold the title of Deputy Clerk of Tynwald, and assists the President in the Legislative Council in organising the council's business.

The Chaplain of the House of Keys

The Chaplain of the House of Keys leads the House in prayers at the beginning of their sittings. 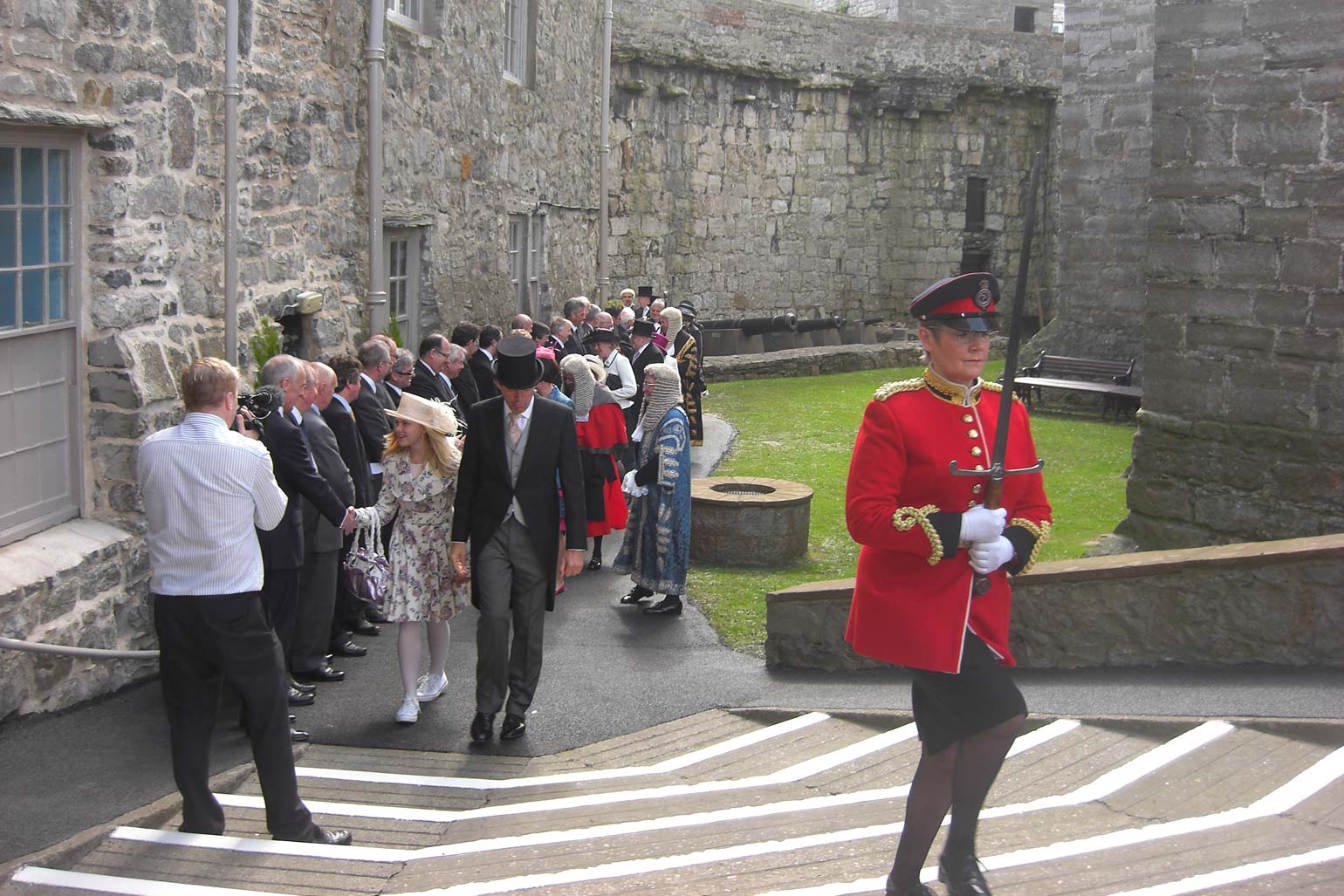 The Sword of State

The ancient ceremonial Sword of State is carried by the Sword Bearer, preceeding the Sovereign or the Lieutenant Governor, at each Tynwald Day sitting. It also appears when Tynwald sits in the Legislative Chambers in Douglas, and a replica of the sword is displayed on non-sitting days.

Tynwald is not properly constituted and no proceedings can take place without its presence. Members show deference to its authority by standing in their places as the sword is brought in and placed in position, prior to commencement of business.

The Sword of State has a two-edged steel blade (29 inches long) with a hardwood hilt (9 inches long), which tapers from the guard to the pommel.

The guard is a thin steel band 11 inches across, surmounted where the guard intersects the blade, with shields carrying the Three Legs.

The sword signifies the duty of the Sovereign, acting through Tynwald, to protect and defend the people from the incursions of their enemies, both in peace and in war.

The sword dates back to the 12th Century, and is traditionally accepted as belonging to Olaf Godredson (Olaf II or Olaf the Black). He became King of the Sudreys (the Southern Hebrides and the Isle of Man) in 1226.

Together with an army of northern Manxmen at Tynwald, he successfully routed a challenge to his rule on 14th February in 1228. His followers are said to have scattered the opposing forces like sheep.

There are three full-time judges on the Isle of Man known as 'Deemsters'. The name Deemster derives from 'doom' or judgement, which, before written records were kept, the Deemster gave as 'Breast Law'.

At the Tynwald Ceremony it still remains the duty of the Deemsters to promulgate Acts of Tynwald (officially declare new laws) in both Manx and English. They read aloud the title of each Act and a memorandum containing a brief statement from Tynwald Hill.

Chief Judge of the High Court of Justice

The First Deemster and Clerk of the Rolls is the Chief Judge of the island's High Court of Justice and, in the absence of the Governor, acts as Deputy Governor.

The Chief Minister, Appointed by the Lt Governor, is the political head of the Isle of Man Government.  The office, in its present form, came into being in December 1986.  Part of the role involves nominating MHKs for ministerial positions, who are then appointed by the Lieutenant Governor.

The Chief Minister and the Ministers are all members of Tynwald.

The Treasury Minister is the frontman for all the Isle of Man Government's internal and external fiscal policies and is therefore one of the most important ministerial posts in Government..

They are responsible for encouraging and supporting a free enterprise and open economy, managing the Government's finances and overseeing the Budget.

There are six administrative districts ('or sheadings') on the Isle of Man, each one of which has a coroner. Coroners are appointed by the Lieutenant Governor under the Customary Laws Act 1422, and are assisted in their duties by Lockmen.

The Isle of Man is divided into six administrative districts, called sheadings; each of which usually has a coroner. The term 'sheading' is thought to be a Norse word for 'ship division' and each district was believed to be responsible for producing a certain number of warships.

Office of the Clerk of Tynwald